Home Tech News 25 years of opening to the world of the World Wide Web: Thus were their first steps in 1991

25 years of opening to the world of the World Wide Web: Thus were their first steps in 1991

On August 23, 1991 was the first time in history that external users to access CERN could start to his latest creation. Had two years being developed by computer scientist Tim Berners-Lee, and was a network that can connect multiple computers to share information.

It was called World Wide Web and have been on August 23, the day that opened the world Internet Day is celebrated. And it comes well remember how he was surfing the Internet in those days, because today we are so used to using the web that we would never think that started opening its doors only 25 years ago. 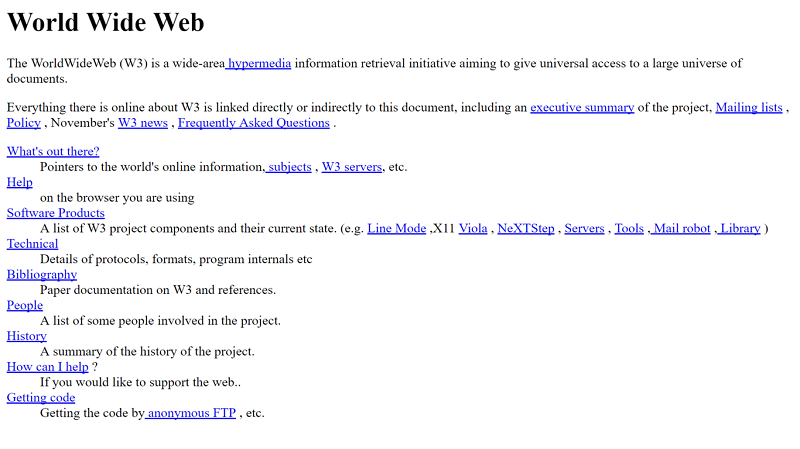 After graduating from Oxford, Tim Berners-Lee went to work as a software engineer at CERN in June 1980. He realized that many scientists had enough problems to share information, as there were a lot of data spread across different computers, but had to log into each to go accessing them.

It was then that he started working on a project that presented in March 1989. It was a proposal for information management (Information Management: A Proposal), which proposed to solve the problems of data loss using a distributed system hypertexts. All computers would be connected together to make it easier to access information of each.

The project did not cause much enthusiasm, but as explained on the website of the Web Foundation, his boss allowed him in September 1990 to start working on it. By October of that year Berners-Lee had already developed three core technologies to take it forward: HTML, the URI (commonly known as URL) and HTTP transfer protocol hypertext.

It was time to implement it, and December 20, 1990 was published the first website in history, but until August 6 of that year was not fully operational. Currently the site no longer exists, but the W3 continues to maintain a copy to see its simplicity.

A year later, on August 23, 1991, the first non-CERN users began to be invited to access your network, what makes today Internauta Day is held. This is how the World Wide Web grew from a local project to a global one, what helped that in April 1993, CERN announced his decision to free to the project code, allowing everyone could contribute to its expansion.

You have to understand that at that time the connections were much slower than we use today, so it took some years to elements attached images as backgrounds or used. In fact, as we can see, the first website ever created was extremely simple, with plain text and a few links.

Navigation in these first pages was therefore extremely simple. In an index showing us links to the different categories or items, and could navigate between them by clicking on hyperlinks. Nothing else, no advertising would impede us or confusing menus, everything was simple, flat and very fast.

The first few pages that were created after the fact were very similar. After visiting the CERN in September 91, members of the Stanford Linear Accelerator Center loved the idea of the WWW, and decided to create their own website, which also would be the first to be created in the United States.

According to a report by MIT, the end of 1993 had already created 623 websites worldwide, such as the Dutch National Institute for subatomic physics, Bloomberg.com, The Internet Movie Database, MTV or Wired.com. Unfortunately most of these early versions have not been preserved, but are images of some of them to help us understand how extremely simple they were.

In 1993 also he was born Aliweb, which is considered the first search engine created to index the World Wide Web. In 1994 they were followed by other projects like WebCrawler and the famous Jerry’s Guide to the World Wide Web, a year later changed its name to simply be renamed Yahoo.

These searchers offered a good method to find pages without having to know your address, so they quickly become popular and gain weight in the network. In 1997, students of Stanford University Larry Page and Sergey Brin created Google, which as we know has ended up becoming the most important search engine.

Currently the Web is constantly evolving. Tim Berners-Lee left CERN in 1994, and founded a World Wide Web Consortium (W3C) with which has since been leading the way open Internet, for example by passing two years ago standardization of HTML5.

From the beginning Berners-Lee created the web with the idea that it was a decentralized, universal, consensual and non – discriminatory space. This has led several times to complain trend toward centralization that is seeing it or ask for the creation of a global constitution of the digital rights to prevent these continue to be violated everywhere.