After many rumors, the Japanese company has unveiled the Canon EOS M5, its long- awaited foray into the segment of mirrorless cameras high end. Following the demands of users, Canon finally takes a step forward by developing a model for professional photographers looking for a lighter alternative or fans who want to move forward with a compact camera.

Moreover, it does so with a camera, that has many new features and that comes with the idea of combining performance and image quality of Canon SLR with the convenience of a compact camera that you can take everywhere.

The heart of the system

Among the main specifications of the EOS M5 find the inclusion, for the first time in this family, the Digic 7 processor. A processor that is unprecedented in the SLR Canon line and we had only seen on the Powershot G7X we had an opportunity to analyze ago few months. His appearance on the EOS M5 responds to the idea of giving it great speed performance in all facets: Commissioning in just a second and a burst seven frames per second (which can reach nine fps with fixed AF).

In conjunction with the processor the other two elements that constitute the heart of the camera is the sensor CMOS APS-C 24.2 megapixels and the focusing system Dual Pixel CMOS AF, yes we have seen in other emerging EOS. In fact, from Canon compare the performance of the M5 with a EOS 80D EOS, an SLR Canon a segment defined as “enthusiastic photographers.”

The final idea of bringing together Canon trio of elements is to provide power, accuracy and performance in a small size body. The sensor promises high sensitivity (up to 25,600) with low noise and wide dynamic range, and precision focusing system, recognition and advanced tracking of typical subjects of a DSLR ( as long as the Japanese firm). 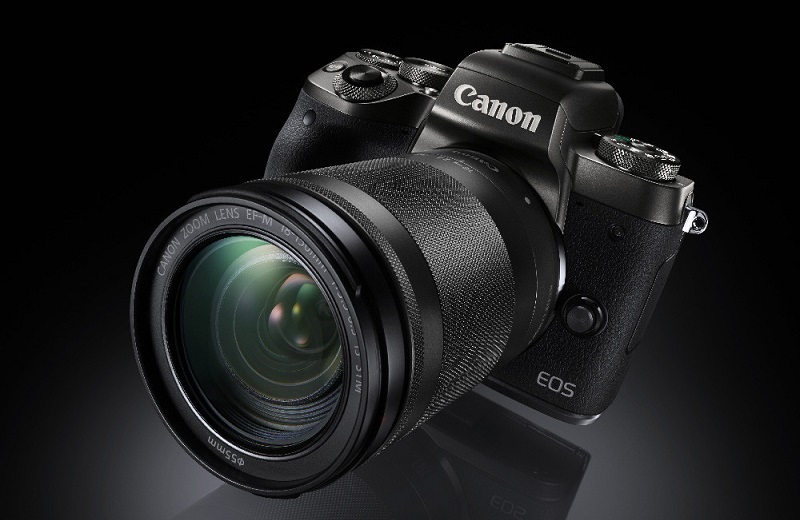 The design lines of the camera might or not but the EOS M5 was created following the general pattern of the range of Canon SLR. Thus, the buttons and controls are positioned so that the M5 EOS familiar to users who are already familiar with their devices.

Design we can highlight the curves of the handle area where manufacturer has added it as a novelty a new dial intended for the thumb to control exposure more easily. Of course, several customizable buttons include your body and provides a great finish, although it is not sealed against dust and splashes.

On the back, two elements focus all attention: The electronic viewfinder and touch screen. The first is located right in the center of the chamber to provide a look and feel similar to that of an SLR handling. It has a resolution of 2,360,000 pixels, a refresh rate of up to 120 fps and 100% coverage.

When the display is used, the ClearView II LCD Touch can be used as a panel to move the AF point with your thumb in the style of a joystick. This TFT screen has a size of eight centimeters (3.2″) and resolution of 1,620,000 pixels, and is tiltable85 degrees up and 180 down.

Two other interesting news from the M5 EOS are in these two sections that have been cared for by Canon to launch time so that the camera is as attractive as possible, both for those who already have a signature model to the other users.

The first is the connectivity; an aspect that wanted to enhance the importance of knowing today is to share images almost instantly. In this sense, the camera includes technology WiFi and NFC and also as a novelty, also Bluetooth low energy that allows a constant connection between a smartphone and camera.

As a result, she says Canon in the official press release, it is possible to view and transfer images without having to take the M5 EOS bag, since it automatically switches to WiFi when necessary. The function also serves to use the phone as remote control low energy consumption.

The other novelty is the inclusion in the M5 EOS of a stabilization system in five axes designed to maintain stability in the videos even if not used IS objectives (and yes improves when one is used). This is a feature that has never appeared in any of the Canon SLR (although it has been long demanded), but paradoxically, good for taking pictures.

You may also like to read another article on Lab-Soft: Waiting for an action camera to record 4K and have screen? Check out the new Xiaomi

Of course, Canon did not want to neglect paragraph of taking moving images is enhanced by image stabilization, processor power and sharing options. Three aspects that should be good allies in this section, although at this point it is noteworthy that the camera does not offer recording in 4K and stay in Full HD at 60p . The reason, according to a representative for Canon, is that the ultra high resolution video is not something the user demanded widely yet.

As for the optical support, the camera is equipped with the EF-M mount carrying all cameras mirrorless Canon EOS but M5 includes a mount adapter EF-EOS M EF and EFS lenses. This makes it compatible with over 80 Canon lenses of these frames (of course without loss of yield or quality). Another issue is that the body and the grip of the camera can withstand the pull if we put a target with certain dimensions, but the possibility is there and is not negligible.

If you prefer to stay with the smaller and lighter lenses EOS M system have at our disposal a total of seven goals, including the new EF-M 18-150 mm f / 3.5-6.3 IS STM that is thrown together with the EOS M5.

It is a versatile lens for general use with a weight of 300 grams, 8.3x optical zoom, STM engine for quiet focus and iris seven blades. Includes image stabilizer four steps that work with the system of five axes of the EOS M5, according to Canon, “to capture smooth city nightscapes or night the atmosphere of a festival.”

For, in addition to the other side and M5 EOS EF-M 18-150 mm lens, the Japanese company has unveiled a new telephoto EF mount for the EOS system presented as “fast and super quiet, for wildlife and sports “.

Its optical design is brand new and has been built using a lens of ultra low dispersion (UD) to reduce chromatic aberrations, and a new optical image stabilizer four steps. On the other hand, the engine built USM Nano is another novelty that was recently presented and offers a very fast approach, exceptional speed monitoring and fluid and silent operation (provided by Canon).

Although surely the most striking novelty of the new target is incorporating for the first time in signing an electronic information in the target itself. Designed for the photographer has the visible shooting information in real time, it allows you to check the settings at a glance. The screen provides a lot of information to the photographer and must be useful, for example, to check the equivalences in 35 mm when EOS cameras with sensors are used trimmed format.