Home Software Review History of Winamp: The player who put the mp3 in our lives and who never said completely goodbye

History of Winamp: The player who put the mp3 in our lives and who never said completely goodbye

Perhaps the main theme of this article is a fond memory for you, perhaps you have not yet gone to that section or maybe you do not know what we are going to talk about, but if we think of keys in the history of the digitization of music and format Mp3 you must inevitably talk about the history of Winamp itself. A software that came to your computer in one way or another to listen to your favorite mp3s and create your lists (over time).

Let’s forget flat design, material design and all modern interfaces to remember this precedent of other players, which was not strictly the first. Who created it and what motivations were there? Why was it losing prominence? If you know it probably nostalgia will invade you for a little while, if you do not know, you probably know the reasons for its decline. 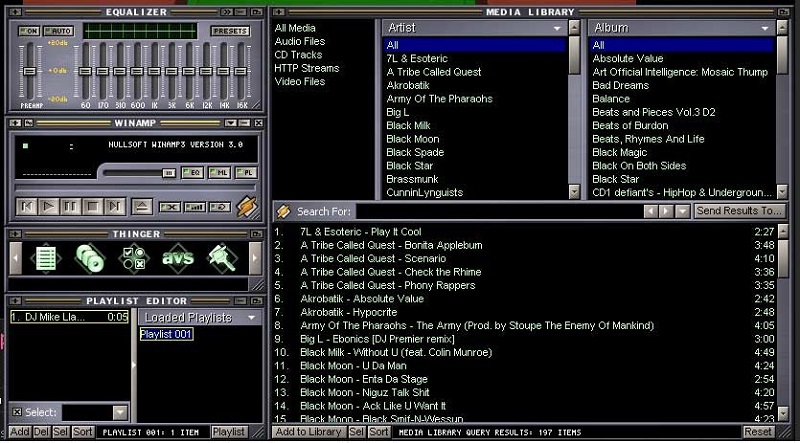 The popularization of the internet, the cheapening of its tariffs and the digitization of the music made that the computer was taking the role of source and player of our songs. In this regard, it is impossible to ignore a chapter of this story in which piracy was the order of the day, with protagonists such as KaZaA or eMule (perhaps more common and longer in time according to country).

Anyway, getting a significant amount of songs in mp3 format made the players much more required and someone thought that what was offered so far (Windows Media Player, Real Player, etc.) did not satisfy the Neither Justin Frankel nor Dmitry Boldyrev (former students of the University of Utah) did. These two created the germ of the player, which became a very simple graphical interface to make more comfortable the use of AMP (Advanced Multimedia Products, the one that considers the first player of * .mp3) in Windows systems (a bar of Title and a menu bar with a few playback commands).

In 1997, Frankel created Nullsoft, his company, and Winamp 1 was released. It was not the only alternative player created to listen to this format of music, but the one that combined characteristics like the creation of playlists or the random reproduction, all in an interface that used to be quite intuitive. Soon became popular, becoming among the most downloaded software in the last 10 years.

What started out as free software ran out with version 1.5, at which time the freeware license became shareware, so users had 14 days free trial after which they would be required to pay $10. The program became popular to the point where Frankel made $100000 a month. And the success did not go unnoticed by the great company of the time, AOL, who bought the software to Nullsoft for 80 million dollars, in fact also remained the streaming service and protocol of SHOUTcast.

The intention was to create an online radio platform for headers like Pandora or Last.FM unifying the Winamp and Warner Music catalogs, but they did not succeed (the existence of some and the absence of the other is the test). That also coincided chronologically with the launch of the iPod and its platform of sale of songs, iTunes, that although it came a little behind the revolution mp3 had its role in normalizing the purchase of mp3 to the detriment of piracy in the United States.

AOL would end up dismantling Nullsoft in December 2003 and Frankel left the new parent company in January 2004. At Rocknerd they cite Nullsoft’s Rob Lord in connection with the AOL acquisition and what Winamp might have been if not managed by AOL the way it was. 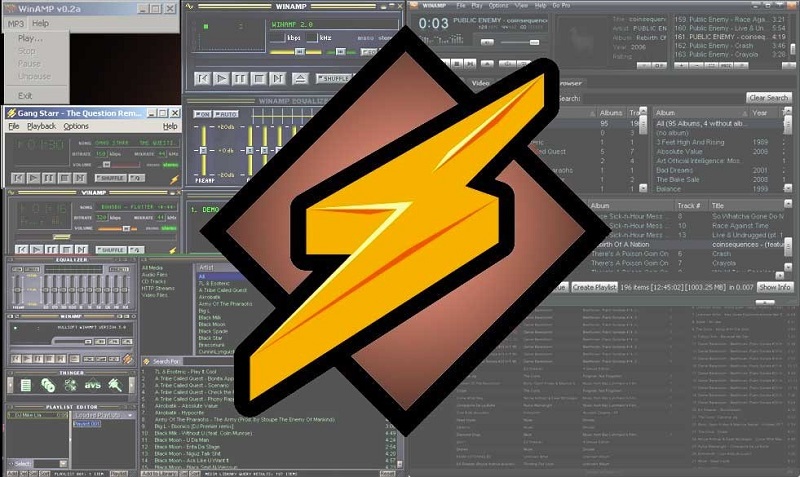 A review of the versions

Depending on how familiar you are to Winamp (if you were a user from the beginning, last minute or if you have never used it), you will have an interface or another in the retina, but the most popular ones may have been from the 1.9, when many new functions and elements were added. In the Old Version blog, they make their particular tribute to the app showing some of the interfaces of these versions.

You may also like to read another article on Lab-Soft: Netflix launches its Flixtapes, playlists to share your favorite series

As we mentioned before, the first version was 0.2 (April 1997), which went beyond plain text to present an interface with the basic elements of a player (title, playback buttons, bitrate, audio output mode, etc.). The dark gray background that would become an identity mark would come with 0.92, in addition to the top bar with yellow lines, and in 1.0 would add a graphic equalizer, list editor, a frequency analyzer and the bar of search.

Version 1.6 started another feature that received the best reception: personalization. In addition, they were expanding the support of different formats, such as MIDI, * .wave and CDs, which came with version 1.91. This interface with the equalizer occupying much of it and the screen for playlists may be quite familiar to you.

With version 2.0 came the Advanced Visualization Studio (AVS) by default (until that time it was a separate plug-in), that allowed to create animations dependent on the rhythm. But it was ** in 2002 when Winamp 3 ** arrived, after the purchase of AOL and completely rewritten at the code level, incorporating a multimedia library, renewed interface and the only one adapted to Linux of all existing ones (and video support from the 2.9), although there was some rejection when consuming too many resources of the system and being somewhat unstable.

With version 5 in December of 2003, the code bases of Winamp 2 and 3 would be converging, trying to include the best of each one, with a renewed interface based on the version 3 supported the skins of 2, As well as their plug-ins. Later, version 5.5 would coincide with the tenth anniversary in 2007 of the app. 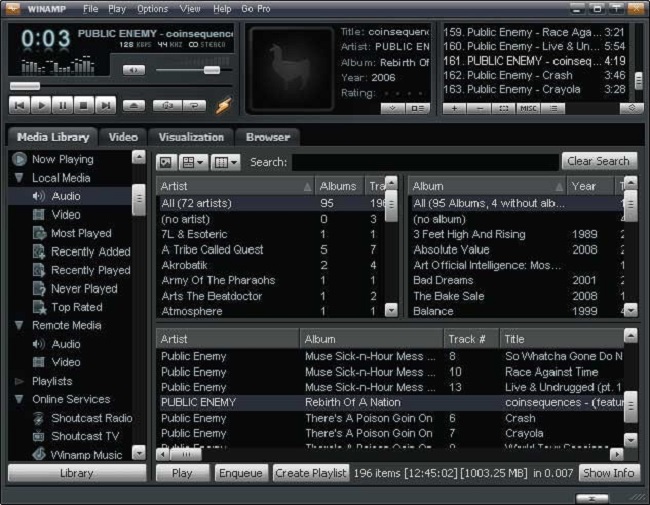 The farewell that remained in notice

Did Winamp die? If you had at least one sentencing notice you were announced to end your availability by December 20, 2013, after 15 years of existence. An advertisement that came after a series of layoffs in April of that year in AOL Music (division to which Winamp belonged) and the rise of streaming.

Arrived that day no, it did not disappear, and what there was a certain abundance of rumors of its purchase for which they sounded names like the very Microsoft. Finally, it was not Redmond who put the capital to keep this part of the mp3’s history alive, but it was the Belgian company Radionomy, an aggregator of online radio stations that already had more than 6,000 radio stations.

However, this purchase did not bring too many movements for the famous player and in late 2015 were Vivendi Group who seized much of the actions of Radionomy. At the beginning of 2016 the headlines that there would be a new version of Winamp, aimed at polishing it from the libraries for which Radionomy had no use rights.

Now, more than a year later, we are still waiting for that hypothetical version, but that does not mean that Winamp is dead. You can go to its official website to download the versions for Windows or for Mac, web that says the eternal promise that “there are news on the way” (in fact, although the versions are not new, the community is active in forums until today).

There has even been an Android version in 2010 (with last update in 2013), although today the battle of listening to music in digital format is something of streaming broadly, whether on computer or mobile devices.

Be that as it may, the case is that Winamp is still alive and working for those who choose to obtain music in mp3 and not the reproduction that allow the services of streaming, with the personalization as a mark of identity and claim. While we can download the app and use it, we have no choice but to finish this review post with the phrase that every fan maintains: Long Live Winamp.