Native applications? HTML5 web design? To opt for a hybrid development? The mobile application developers often face the problem of what path to choose when riding your application. Some defend the native development to exploit the particular functionality that each platform offers so that takes advantage of all the possibilities of each. However, this requires a lot of effort, especially when you want to reach the greatest number of users.

So from the more pragmatic view, is committed to a development or hybrid, as well resources that otherwise would have to devote exclusively to iOS or Android (and even Windows Mobile) were optimized. It is the vision of “write once, run anywhere”. 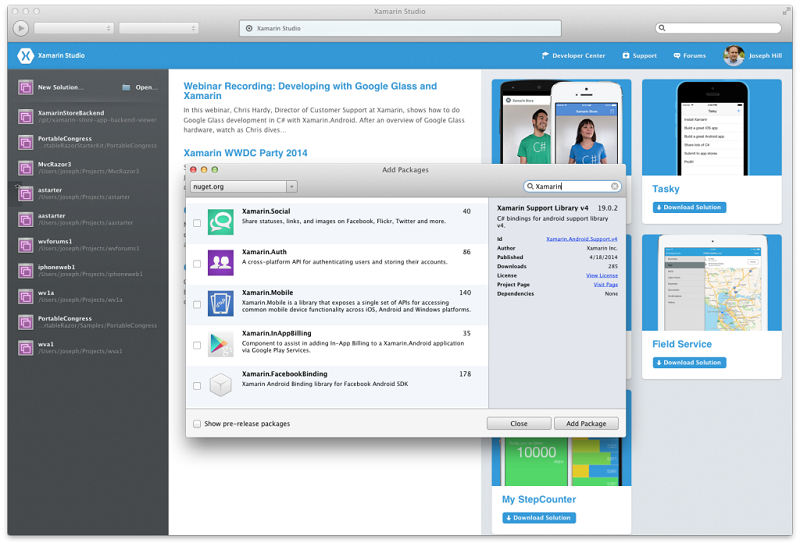 “We created Xamarin because we knew there had to be a better way to build mobile applications are developers, so we know what they want developers: a modern programming language, powerful tools, a flow of efficient and enjoyable work and power to create the best user experiences. Our mission is to develop great mobile applications is a quick, easy and fun,” says his page web.

The origins of Xamarin

With over 250 employees in five offices and 14 countries worldwide, Xamarin has more than 15,000 customers in 120 countries, according to their own data. Nat Friedman and Miguel de Icaza founded the company in 2011. As explained in the second one on your own blog, the challenge was to build a new commercial .NET offering for iOS and Android, continue to contribute, maintain and develop open source components Mono and Moonlight Moonlight and explore opportunities in the mobile space and app store for Mac.

And this is where we must look back to begin to understand part of this story. Mono is an open source implementation of the .NET Framework (of Microsoft) based on the ECMA standards for C # and the Common Language Runtime. Although currently Mono is mainly supported by Xamarin, since it was announced in 2001 has gone through many different stages. Mono was driven by Miguel de Icaza and in 2004 released by Novell (then one of the largest commercial rivals of Microsoft) after Novell bought Ximian a year earlier. Ximian was founded by the creators of Xamarin.

However, the November 22, 2010, Novell was sold to Attachmate Group, which ended up being the death sentence for Ximian and the first foundations on which would settle the current Xamarin.

The acquisition of Novell left a number of large software projects open in limbo code. Attachmate is committed to continue supporting the distribution SUSE Linux, but other open source products were running Novell unluckiest and its development was to be put aside and therefore are laying off people. The Mono project, which developed an implementation of open .NET and Microsoft C # code, received a blow when Attach mate said goodbye to the development team. Miguel de Icaza responded by mounting a plan to ensure that further progress without Novell Mono. Therefore, as Xamarin born.

“After the layoffs Novell, an option for everyone would have to go home and try to find a different job. But we love this project, and we love what we’re doing, ” he declared at the time De Icaza. After obtaining the rights of Mono and gain customer base code, Xamarin ended up being self – sufficient and sustainable, with revenues covering his initial staff, about 50 people.

In the last 12 months, according to data from Forbes, the Xamarin developer community has grown by 98 percent and sales have more than doubled. Xamarin differentiation is due to its ability to build native and hybrid apps for iOS, Android, Mac and Windows using a single based on C # code. That is, thanks to this solution, companies can continue to use developers lifetime to build mobile applications without having to invest in additional training for their employees in new programming languages ​​more typical mobile environment. In addition to development, Xamarin also offers other basic services for mobile applications such as testing more than 100 handset models, life cycle, etc.

Meanwhile, from the point of view of developers, Xamarin promises to drastically reduce the time needed to ensure that their applications work on iOS, Android, Windows, Windows Phone and Mac by combining the benefits of native development and the mantra “write once run on all platforms.”

The love-hate relationship with Microsoft

Both Miguel de Icaza and Nat Friedman are old acquaintances of the open source community. In fact, they are the creators of the GNOME project, promoted as an alternative to Windows and what catapulted them to fame of the open source community. Interestingly, both met in the company, at that time, was more confronted with that movement: Microsoft. Friedman was working there and De Icaza went to a job interview for the Internet Explorer team.

We could say that the relationship between De Icaza and Microsoft is “neither you nor without you”. The corporation has invited many times the developer to participate in its events and even participates in the Microsoft Developer Network.

For some, part of the success of Xamarin is the community of C # developers who owns and who have relied on this platform to adapt to the new mobile stage.Although Microsoft is not one of its investors, many consider that it could not understand the 82 million dollars they have received in 3 rounds of funding by 5 companies if it were not for this “relationship” with Microsoft.

For many, the success of xamarin would not be understood, nor its 82 million raised investment funds, were it not for the relationship with Microsoft and its developer community

In addition, even Xamarin has special prices for MSDN developer community. The relationship between the two is key and stable. Friedman himself explained this agreement on the blog of the company in late 2014. As we recognize José Miguel Torres, “since it is Nadella in front of Microsoft – and his new position strategically the relationship (between Xamarin and Microsoft) changed “.

“I do not work for Microsoft”

Microsoft, which has had some trouble adjusting to the mobile ecosystem, found in Xamarin a great ally. Promises to have a universal development platform that would allow them to write once and run in any environment have been numerous. The last and most recent, Universal Windows Platform, which however seems not to have convinced the developer community, not least because only affected Windows operating system. The problem Visual Studio developers face is that they want to continue coding in .NET languages ​​like C #, and use XAML to build a user interface, but your customers demand support for non – Windows platforms, especially iOS, Android and Mac. And Xamarin tools are closer to what developers are demanding.

However, it is not without its problems. This is a .NET third party, based on Mono (open source) and, therefore, is not one hundred percent aligned with Microsoft .NET Framework. Some also complain also the price ($999 per developer and platform for a subscription of one year in the business version).

What is clear is that the C # language has been a great success for Microsoft and is one of its key to attract or keep developers on its platform. But the world seems to decant more by new mobile devices for desktop PCs traditional (according to aDeloitte report , sales of smartphones will surpass both units and revenue to those of all the sectors of the PC, TVs , tablets and game consoles), so for C # experts should not be limited to Windows and should try to replicate its success in the multi-platform world.

Therefore, on more than one occasion it has been rumored with the possibility that Microsoft end up pulling out the checkbook to gain Xamarin. Although the relationship between them did not deny nor its protagonists, one thing to be partners and another is that there is something more. As made ​​clear last year and half De Icaza himself, “do not work for Microsoft.”

Moreover, “both our CEO (Nat Friedman) as the CTO (Miguel de Icaza) have made ​​it clear that Xamarin aims to be a leading independent company dedicated to cross – platform development,” stresses José Miguel Torres.

You may also like to read another article on Lab-Soft: DriveDroid: Boot distro GNU / Linux PC to Android devices

Completing the circle with Java

In the area, there is a kind of silly season on the hope that, like the prodigal son, Miguel de Izaca runs back to Microsoft. Rather than be bought, Xamarin is news because she was the buying.

It was made ​​public in October the purchase of RoboVM by Xamarin. The amount of the transaction was not disclosed, but RoboVM brings to the market Xamarin Java development; i.e. between 5 and 7 million more programmers, according to estimates by IDC. Therefore, both companies would add some 13 million developers with a vision: to facilitate the development of business applications on any platform.

In addition, the young company has signed important agreements with other multinationals. For example, Oracle, that named to Xamarin as its partner for cloud business, which means that Xamarin enables a new tool that allows developers to host their applications on Oracle Mobile Cloud, a cloud that competes with Amazon Web Services, bluemix of IBM and Microsoft Azure. In return, Oracle allocates part of its marketing to bring this software development kit Xamarin to a new segment of developers.

Simplicity, the key to success

Part of the key to success of Xamarin may be that, in a simple but effective way, solves some of the problems of developers, especially those used to working with C # and now face the mobile ecosystem, more fragmented than the PC world. In addition, developers do not have to worry about whether the appearance of applications will be optimized for each mobile operating system, which also includes wearables, not just phones.

Miguel de icaza, founder of xamarin, is an idol in the open source community. Some, however, believe has betrayed the principles of free software

But Xamarin is not alone and is the only option for developers. Other proposals are Appcelerator and Phonegap. They all have their good points and bad points, some of them summarized in specialized comparative. For example, although Xamarin covers major operating systems, it does not provide the spectrum appears Blackberry, which do provide the other two development platforms.

Xamarin therefore seems to have seduced, especially to large companies needed to have mobile applications platform and those developers used to working with .Net and C #, but who believes that cross – platform development is not a panacea and that savings which it is barely reach 20 percent, and will always be to do a specific job for each operating system if a polished and optimized application will.