Windows 10 Cloud is completely filtered, so is Microsoft’s answer to Chrome OS

Windows 10 Cloud seemed to be a new flavor of Windows 10 designed for the cloud. And with the passage of the days we have been knowing new data, like that will want to compete against Chrome OS or that would be limited to universal applications to be lighter.

But events have accelerated, and this weekend a Twitter user has filtered the ISO of one of the beta versions of Windows 10 Cloud, and some media like Neowin have tried it to discover that there really is not much to say about it who was not already known, but at least serves to rule out some of the theories that had been speculated.

No, Windows 10 Cloud will not be a version of Windows accessible from any browser in exchange for a subscription such as Office 365. It was something that the latest leaks pointed to, and today we can confirm after the ISO has come to light. As expected, it is a kind of version of Windows RT belonging to the family of Windows 10 made to try to compete with Chrome OS, although it will be upgradeable to full versions of the operating system.

The play is going to be interesting. Microsoft says it is getting better and better in the highest ranges, and this move seems to be focused on conquering the lower end of the device, those small notebooks from 200 to 300 euros where Google is getting stronger with Chrome OS.

How is Windows 10 Cloud?

In this video published by Neowin we see that aesthetically the differences of Cloud with the full versions of Windows 10 are minimal. The interface is the same, the start menu is the same and the browser works the same in desktop mode as in full screen. Therefore it seems to be confirmed that it is a more flavor of the Windows 10 family.

The first question that can be answered is whether the system is unique to Universal Windows applications or can work with any of the apps that are downloaded in the Windows Store. And here we realize that it is not yet fully mature, as it gives us a lime and sand.

The desktop applications migrated to the Windows Store still do not work, but Windows 8 apps do. This seems to mean that, although the execution system is not quite polished, we can use all the applications in the native store. Apps without having to be universal. Good news to have a wider ecosystem, but that is still bad to see that this seems still insufficient to compete with Android applications in Chrome OS.

You may also like to read another article on Lab-Soft: Microsoft hides a ‘Game Mode’ in Windows 10 that will enhance the PC gaming experience

For everything else, it is curious that being a system made for the cloud does not come with integrated OneDrive, something that surely end up coming in the final versions. When you try to run conventional desktop applications, executables or PowerShell scripts you get the classic message that the app is not compatible.

In fact, we see that in this ISO there seems to be an annoying bug with which this message of incompatible applications still leaves you even even when you are not trying to execute any. In any case, it is something understandable considering that they are still at an early stage of development.

For everything else, the truth is that both the interface and the menus of options are almost identical to the full versions of Windows 10, so it seems that it will be one step ahead of what was Windows RT, although one behind Of the other versions due to its limitation of being able to use only applications of the official store. 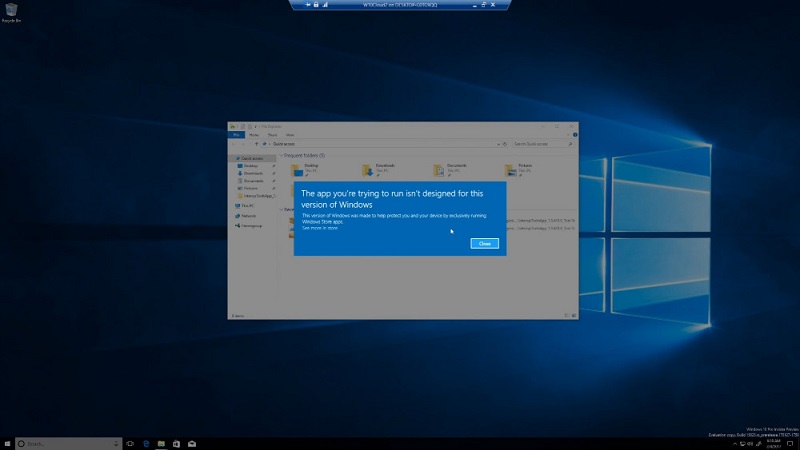 We could see it sooner than we think

At first, because the rumor had just been born, it was pointed out that we might not see Windows 10 Cloud until the Redstone 3 update of the end of the year, but seeing the state so advanced in development is not ruled out, which appears earlier in the Creators Update next April.

The strategy seems to me quite interesting, that of trying to conquer the entry market with a Windows that incidentally pushes the developers to bet on the official store operating system. A vital step forward if Microsoft really wants to go for it all with its hypothetical Surface Phone, which will need all the applications that are possible to do better than previous Windows Phone devices.

In any case, the build you can see in the adguard tweet the user who filtered it, but I would not recommend installing it on a computer that you are going to use with assiduity because it is still very green and will not work at all well. In addition, precisely because it is a beta there may still be many things that change in the face of its final release, so it is best not to draw definitive conclusions.