Home Software Review Microsoft and Linux: From hate to love!

Microsoft and Linux: From hate to love!

The former CEO of Microsoft did not hesitate to declare in 2001 that, “Linux is a cancer“. He did this by criticizing the functioning of the GPL, and that became the ultimate proof that Microsoft and Linux did not get along. It was a time of hatred.

How has it changed the story? The leading role of Linux in the server segment has made ​​Microsoft’s own change his speech and his attitude to this operating system and above all the FLOSS (Free / Libre and Open Source Software) in general, and today we are with evident proofs that the picture is clearly different. These are times of love.

With Nadella turned the tables

It is likely that much of what has happened to Microsoft in this area (and many others) is due to the change of CEO: the arrival of Satya Nadella has brought new life into a company whose mentality has changed significantly. The Nadella himself explained in an interview in 2014: “do not want to fight old battles, want new battles“.

Microsoft CEO admitted how Linux had become an essential part of the way companies implement their online business, so the Redmond Company has had the good sense to approach a rival who has now ceased to be, or it is not at least to the same extent as it was years ago. 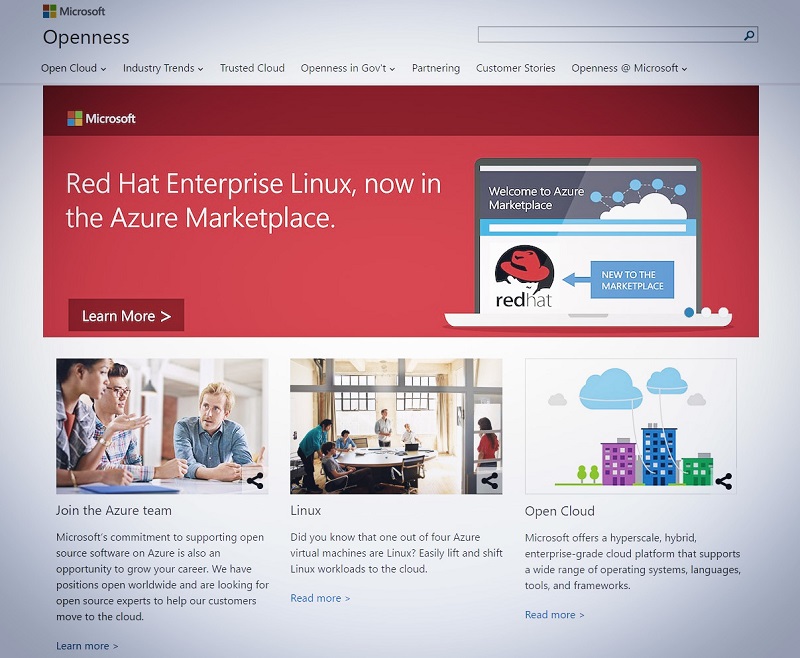 The cloud computing is primarily responsible for many of these changes: the success of the great services proposed giants like Amazon or Google based on Open Source solutions has made ​​the cloud platform of Microsoft -Azure- has put you googly eyes at Linux and Open Source in a while.

The last of the demonstrations that love for Linux we saw this week when Microsoft announced it would begin offering support for SQL Server on Linux, something that was viewed with some skepticism by some -whose analysts arguments were countered – but that once again it reinforced this new philosophy of Microsoft. You know. If you cannot beat the enemy, and all that.

That announcement did not come alone. Yesterday we learned of how Microsoft has created an Open Source operating system based on Debian you called SONIC. As hear. Or almost, because the operating system is not a Linux distribution for the desktop, but an operating system for switches, those boxes of incoming and outgoing Ethernet cables everywhere and are one of the key elements of network infrastructure any data center that boasts.

The project is actually a result of the role that Microsoft is playing in the Open Compute Project (OCP), one driven by Facebook in 2011 initiative that tries to make hardware manufacturers provide specifications and open standards in their network equipment so that all type of organizations, companies and entities can buy these devices suit your needs and the way they deem appropriate. It is a bid for freedom in the network infrastructure, which contrasts with the traditional practice of many manufacturers who based their products, and business models in hardware devices and proprietary hardware solutions.

This is another of those many examples of a change of mentality that Nadella seems to have assumed with astonishing naturalness but certainly not married to that image of Microsoft as uncompromising defender of their proprietary standards and an absolutely closed development model enterprise. Make no mistake: Microsoft continues to protect its philosophy closed swashbuckling, but that has not prevented occasional open window – pun intended – to development and Open Source philosophy.

In fact it has become a member of consortia company involved in open standards such as OCP mentioned, but also very fashionable projects like Hadoop or Docker. There have been especially prominent advertisements in this area as the opening to the Open Source .NET, a whole bombshell for the development community that saw the bat was the core of this platform GitHub, something unthinkable years ago.

Developers of the World Unite

This repository project developer has become basic not only for Microsoft but for other large technology, and there is possible to find some outstanding projects released into Open Source as ChakraCore- the javascript engine of Microsoft Edge- or parties they have been released from development suite, Visual Studio, and Visual Studio Code. It is curious that Microsoft also has admitted the relevance of this platform for project management development when while providing its CodePlex with the same objective.

It has also been mulling on the hypothesis of a Windows Open Source, an issue that would pose a radical change in the model of Microsoft and Microsoft engineers as Mark Russinovich called them “absolutely possible“. The launch of Windows 10 and all that universal and converged platform point to another direction, of course: Microsoft’s intentions regarding its management software has been widely criticized by gurus video game world as Tim Sweeney. Although there are arguments supporting Microsoft’s strategy in this -Other we believe that Microsoft is not much worse than Google and, of course, that Apple – the fact is that potential Open Source version of Windows now seems even more unlikely.

The opening of Open Source projects has not stopped in recent months, and indeed this new trend of releasing engines artificial intelligence also has finished convincing Microsoft, that shortly after the publication of that article released CNTK, its framework for the development of solutions in which artificial intelligence is an integral part – example Cortana and Skype Translate-.

There are many more initiatives to “build bridges between Microsoft technologies and non-Microsoft technologies,” as indicated on its website Microsoft Open Technologies, which will soon be integrated with the website generally and the examples are numerous: connectors between SQL Server and Hadoop, Java Eclipse plugins for Azure, Azure installers for MongoDB, Node.js support, participation in open projects like Apache Cordova, WebRTC or HTTP / 2.0 specification and a variety of other projects that demonstrate again that new mentality in which Microsoft is no longer ” with you or without you”, but simply “all”.

If someone loves Linux, that’s Azure

As mentioned, the love that Microsoft seems now professes for Linux has in the cloud to your particular Cupid. The launch of Azure was one of the most important efforts for a company that had dominated with solvency enterprise computing. Suddenly it was no longer the case: although the jobs remained by his Office, the services began to escape Microsoft’s fingers.

Its proprietary solutions for platforms -Windows, Exchange, SQL, Sharepoint, IIS and a long et cetera servers suddenly lost against a whole batch of Open Source solutions were gradually imposing itself on the market. Red Hat took great boom of these services to become one of the few clear examples that you can make money (much) with Open Source, and the rise of Cloud Computing changed the landscape forever. Suddenly Linux and Open Source had more sense than ever in these environments.

When Microsoft launched Azure in October 2008 did so with the mindset ” we what we cooked, we eat it .” The platform, in fact, born as Windows Azure, which made ​​it clear that was intended to provide Microsoft solutions for the cloud. The focus would change in 2012, when Microsoft realized it was missing a large market segment not to give the ball to Linux.

You may also like to read another article on Lab-Soft: The future of Ubuntu is only the 64bit version

Said and done: started support for Linux virtual machines that would gradually increase and would kill another sign that times had changed. In April 2015 changed the name of the platform, which is now going to be “Microsoft Azure”. The Windows had fallen by the wayside as proof that focusing solely on solutions Microsoft in their cloud services was not the liked by many CTOs and system administrators who saw in it an obstacle to contemplate Azure as an option.

These changes are further strengthened with the introduction of Azure Cloud Switch, which announced in September and has finished as mentioned leading to the development of Sonic. Actually, it was a step in such a support was reinforced in October 2014, when Nadella announced among other things support CoreOS – a Linux distribution focused on work with Cloudera Docker- and concerning systems data management and business analytics.

A year later, in November, the final agreement would: Red Hat reached an agreement with Microsoft to provide combined solutions leveraging Azure and consolidated the bet Microsoft that had definitely proved his love (or maybe need for love) for Linux “. Remember, “Microsoft ♥ Linux” “told us responsible for the Windows Server blog less than a year ago.

In fact, also they admitted in Microsoft a year ago, 20% of the operating systems that are used in Azure Linux. It is likely that after the agreement with Red Hat that percentage increase, although both CoreOS as CentOS, Oracle Linux, SUSE and Ubuntu were already supported in the cloud platform of Microsoft. Things got especially interesting when in 2012 appeared the report of contributions to the kernel Linux and Microsoft proved to be among the five companies that had contributed most. This prominent role – probably due to the support of distributions virtualization technology Hyper-V- diluted in subsequent years, and for example in the report of The Linux Foundation last year Microsoft will not appear anywhere. That did not matter, because the work was done.

At least, that particular job. Because what is clear is that in Microsoft are changing many things. Obviously, necessity of course, but we are glad for it.