Home Gadget Mavic Pro, fly a drone is easier than ever

Mavic Pro, fly a drone is easier than ever

DJI presented Mavic Pro, a folding drone, reduced and easy to carry from one place to another size . An alternative that needed his catalog but above all users. Now, a few weeks more afternoons we could try. We went to Lisbon to see firsthand what all that has to offer. And although there will soon complete review, for now we can say that it is much more than we expected.

DJI has existed for several years manufacturing drones and it shows. The Mavic Pro has all the experience and the latest technology DJI inside. Something is clearly demonstrated after a few minutes flying. And it may be by size, by the slightest noise generated or because every time we are more used to seeing this type of product but the truth is that no longer gives fear fly. Something that, for example, has not happened to me with other market options, including DJI. Here the fear of crashing is not as present.

As I say, blow up the Mavic Pro is easier than with other alternatives. Anyway there will always be some minimal precautions follow. But if we have some previous experience we can do just to know how to take off safely. If not, just someone to explain to us a little about how it’s all about to embark on it. In addition, the option to have assisted takeoff and landing everything becomes easier. Not to mention that, once it has taken off, the work of the different sensors makes the drone in flight remains very stable. 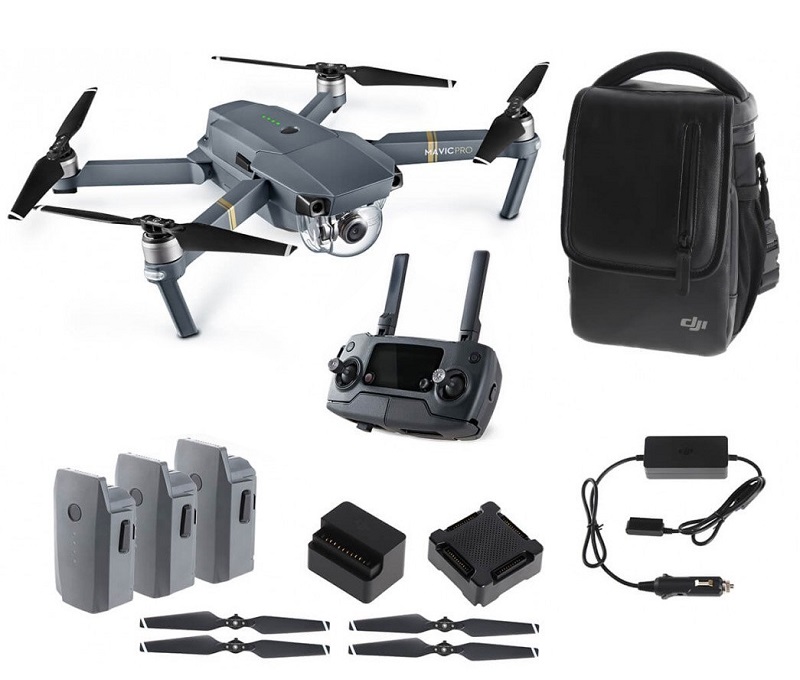 This stability is achieved by using different sensors, from five cameras to a barometer and the complementary use of technologies such as GPS or Glonass. So Mavic Pro remains in stable flight even with wind gusts up to 38.5 km / h.

To control Macvi Pro there are two options: use a smartphone and its respective application for iOS or Android, or the new command. We combine command and smartphone the better, because we can scroll everything that drone camera capture.

If we use the new command, as in our case, we have a sense of precision when piloting the drone amazing. Of course, you need to have eye with how we selected. The sport mode allows reach 64.8 KM / h and is suitable for experienced pilots. So be careful. To get started, although its purpose is to help filmmakers and photographers to capture content with greater precision and smoothness, tripod mode is the most appropriate.

In tripod mode not only in drone moves with greater stability and lower speed, the joystick reduces their sensitivity and is easier to control. We may make movements more accurately, smoother movement, etc. Anyway, although you need to practice and adapt, with only about 10 or 15 minutes we believe that anyone will be able to control it.

As time passes is really enjoying this aircraft piloting. Reaching the point where you want to have one, to always take with you and see how to squeeze all its possibilities. Because if they were already attractive before, now the new Mavic Pro makes it much more fun and safe. Something important to those who will start in this world.

You may also like to read another article on Lab-Soft: Swat Minidron Parrot, the challenge of creating a drone for all audiences in price

Much more than a folding drone

It may seem that the folding design is the highlight of this Mavic Pro but the truth is that it is not. Beyond those arms that allow the device to collect power stored in virtually any bag or backpack, the most interesting is inside.

By using different sensors and technologies, the Mavic Pro has become a much safer drone, easy to use and fun. The highlights are the following, although our review will discuss them in detail.

Of course, many of these sections are not exclusive of DJI, there are other manufacturers that allow similar options. Although there will be specific things that are different, and that could make the difference preciseness both for and against.

Complementing everything seen is above the DJI Goggles, glasses with which we can see the same as the drone is capturing. It is true that for many might seem like an unnecessary accessory since the smartphone screen is also shown, but the quality and immersion offered makes it worthwhile.

These glasses have two OLED screens with 1080p resolution for eye. They look really well and although you can see a minimum lag the truth is that OCUSYNC, direct transmission technology for video drone to glasses , works really well.

It is an accessory that will give much play in the future of the company. Because it could be used not only with the Mavic Pro but with upcoming releases. And there go all uses and drones, who knows if even proposed sports.

After this initial contact with the Mavic Pro, I think anyone who want to have a try and fly it over and over again. Size, handling, technology and many other details product launched by the popular Chinese brand DJI will achieve convince many users. Perhaps until it becomes all a super sales. We’ll see what happens over time.

The only problem that will continue to face is the laws that each country imposes the use of these devices. Limitations which are partly understandable for security but much determine not only use but even purchase intent. Because there have certain freedoms and possibilities to blow it up and get the most out so it is a bit frustrating. So we’ll see what happens. But if it were not so many users and we would have a drone in the backpack.