Home Hardware Review Lenovo Legion Y920, a PC with a first division hardware that aspires not to be intimidated by any game

Lenovo Legion Y920, a PC with a first division hardware that aspires not to be intimidated by any game

The fans of Windows games can be satisfied. Most of the equipment manufacturers are not willing to pass up the opportunity to get a slice of a cake as appetizing as is the market for computers for gamers. What’s more, François Bornibus, Lenovo’s president in the Europe, Middle East and Africa region, confirmed just two months ago that the market for gaming equipment is helping to reduce PC crashes.

The desktop computer to which we dedicate this analysis is currently one of Lenovo’s most ambitious proposals in the field of video games. And it is because you only need to take a look at its impressive specifications to realize what it intends to offer: play at 1080p with the highest possible image quality and cadences well above 60 FPS, and also that the gaming experience 4K UHD leave a good taste to those enthusiasts who opt for a monitor with this resolution. If you want to know if this Legion Y920 has reached its goal you just have to keep reading. 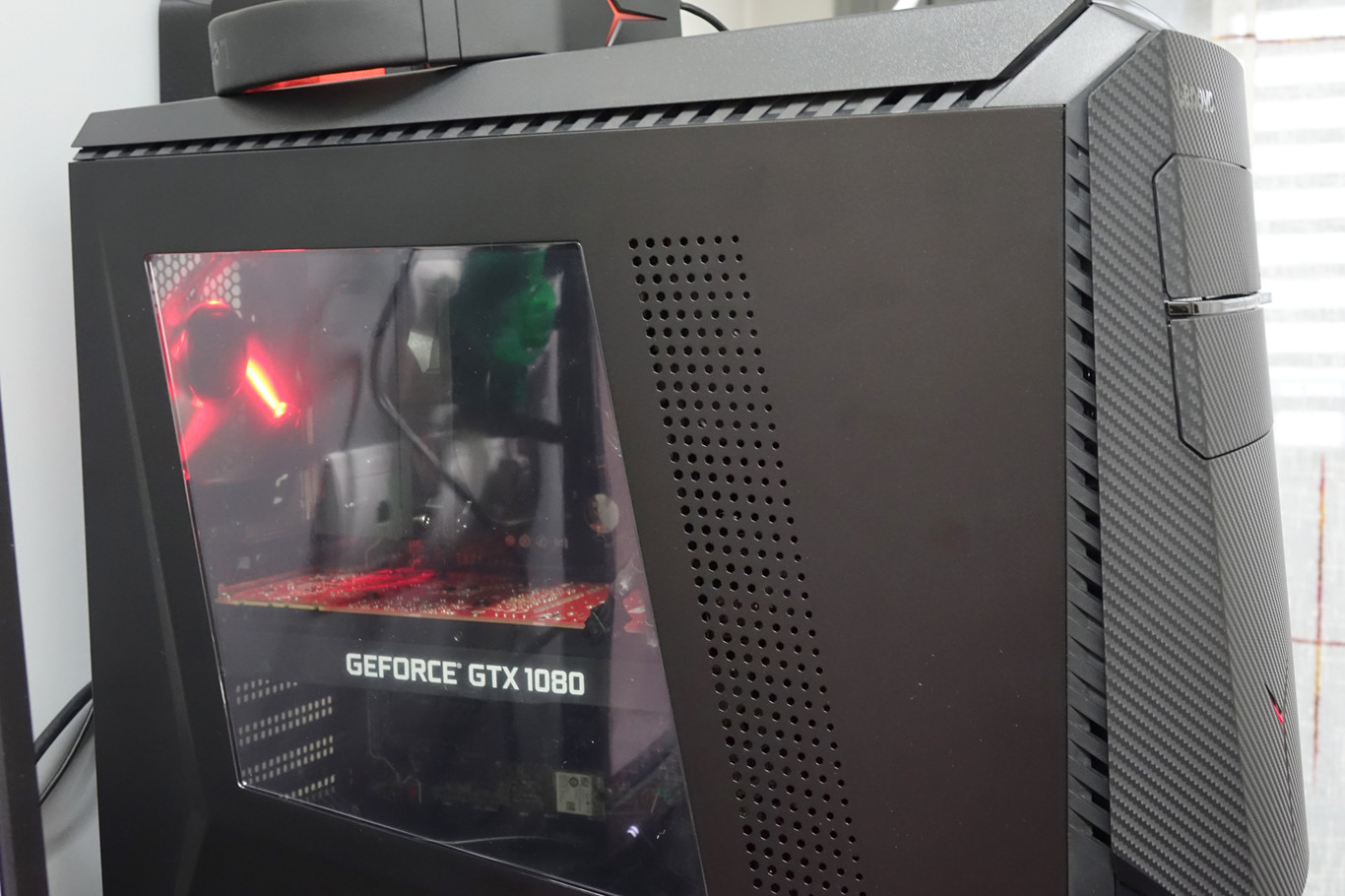 As you would expect from a high-end computer, this PC comes impeccably packaged. Nothing else to grab it to extract it from its packaging it is inevitable to realize that it weighs more than 14 Kg, which anticipates us, on the one hand, that Lenovo has opted for a rather solid chassis, and, on the other hand, that inside of this equipment reside interesting components such as a graphics card with NVIDIA GeForce GTX 1080 GPU, which has a size of intimidating, and two hard drives with a very respectable capacity, as we will see a little later.

In my opinion, in this team Lenovo has reached a very successful balance between the striking and “result” aesthetic that many gamers like, and a certain sobriety that also usually attracts those players who do not want a PC that seems designed by a extraterrestrial civilization. Yes, it is attractive, and, in a way, youthful. But not in excess. A priori I think a point in their favor. 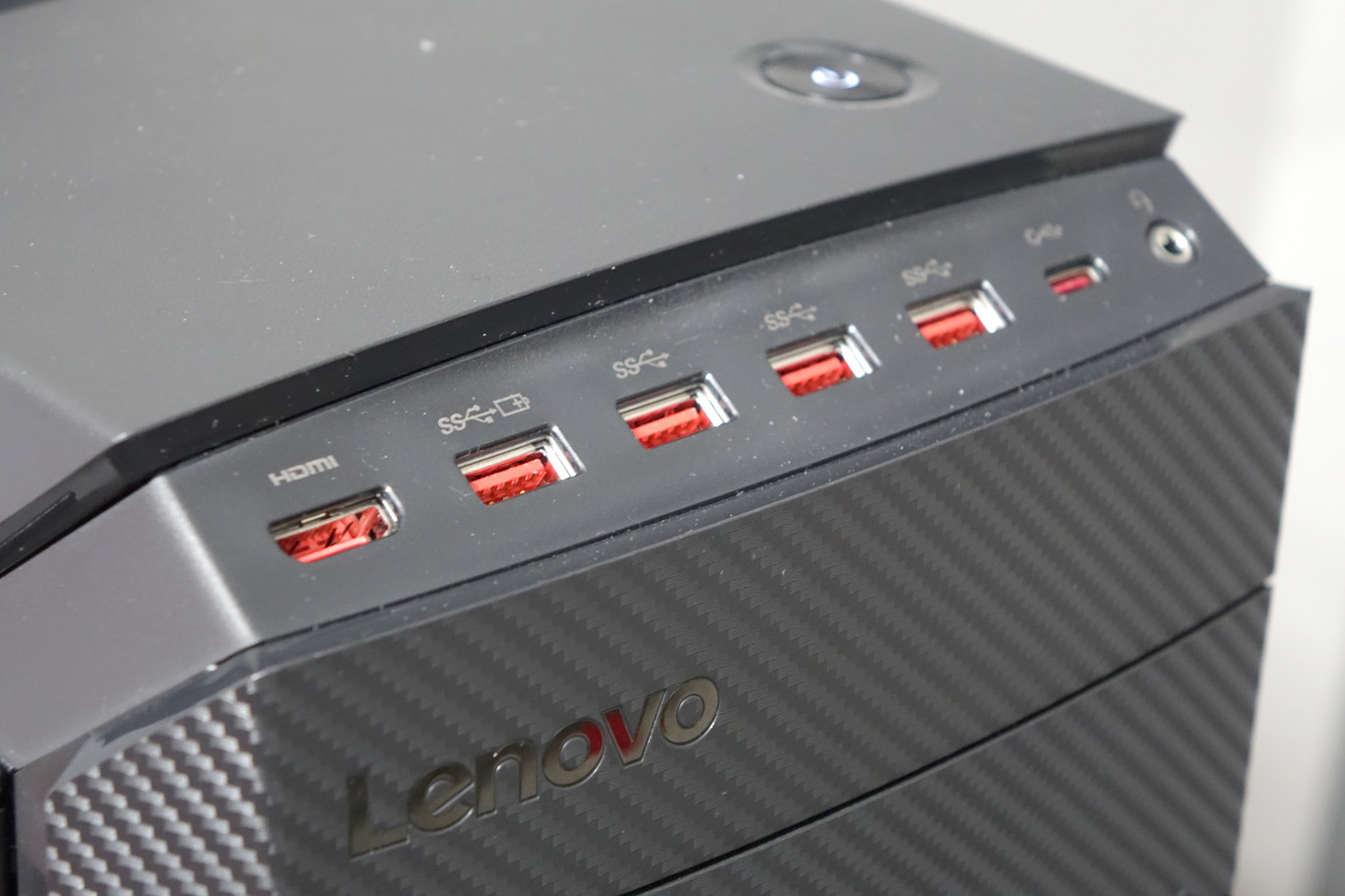 Together with PC Lenovo has also sent us a set of peripherals, which are the ones we have used to test it , and which are part of its range of products for gamers. The monitor is the 27-inch Y27G, with curved VA LCD panel, Full HD resolution (1,920 x 1,080 points) and compatibility with NVIDIA G-SYNC. We have also used the mechanical keyboard of the Y series, as well as the mouse and headphones with surround sound from the same family. We will go deeper into these components a little later.

The configuration of this PC leaves no room for doubt: Lenovo has put all the meat in the spit. And, as you can see in the table, not only has a powerful Intel Core i7-7700K microprocessor and a graphics card with NVIDIA GeForce GTX 1080 GPU well equipped for 8 GB of dedicated memory, but also by 32 GB Main memory of type DDR4 manufactured by Corsair, and two hard drives, one SSD of 512 GB and another mechanical of 2 TB, which have performed very well in our tests.

On paper, specifications like these should be enough to allow us to play any current title with the highest image quality at 1080p, and under very interesting conditions, although not as ambitious, in 4K UHD. We’ll check it a little later. 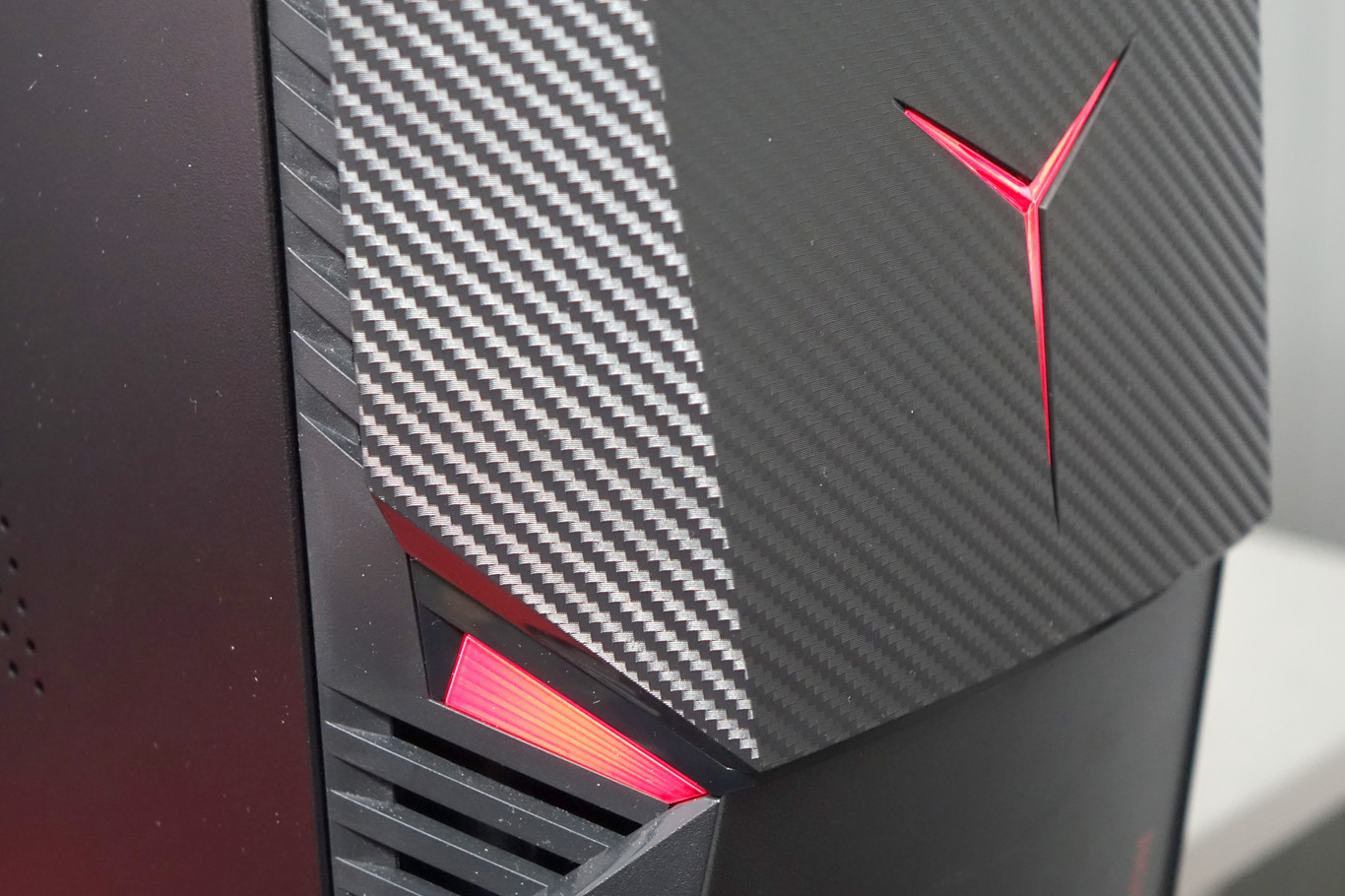 I started the analysis highlighting the balance that Lenovo has chosen to opt for a modern chassis and resultón, but not too flashy, and I reaffirm. Its finish and its overall construction quality are good, although not outstanding because some of the plastic parts suffer from a certain fragility, like the handle on the top that allows us to access the interior of the chassis without the need to remove any screws.

A detail that I think is really cool is the finish with carbon effect of the front panel of the machine, a distinctive touch that, combined with the RGB lighting of both the interior and exterior of the chassis, contributes to that balance between sobriety and modernity. I have spoken.

On the other hand, as usual in the equipment for gamers, the left side panel has a transparent window of methacrylate that allows to see the inside of the PC. The component that claims all the protagonism is, without doubt, the graphics card, which with its imposing size extends throughout the entire chassis floor. Although, if we like to play with low ambient light, the RGB LEDs inside and outside the box, whose color can be customized through the software, create an environment capable of immersing us to the maximum in our games.

The interior of the monster 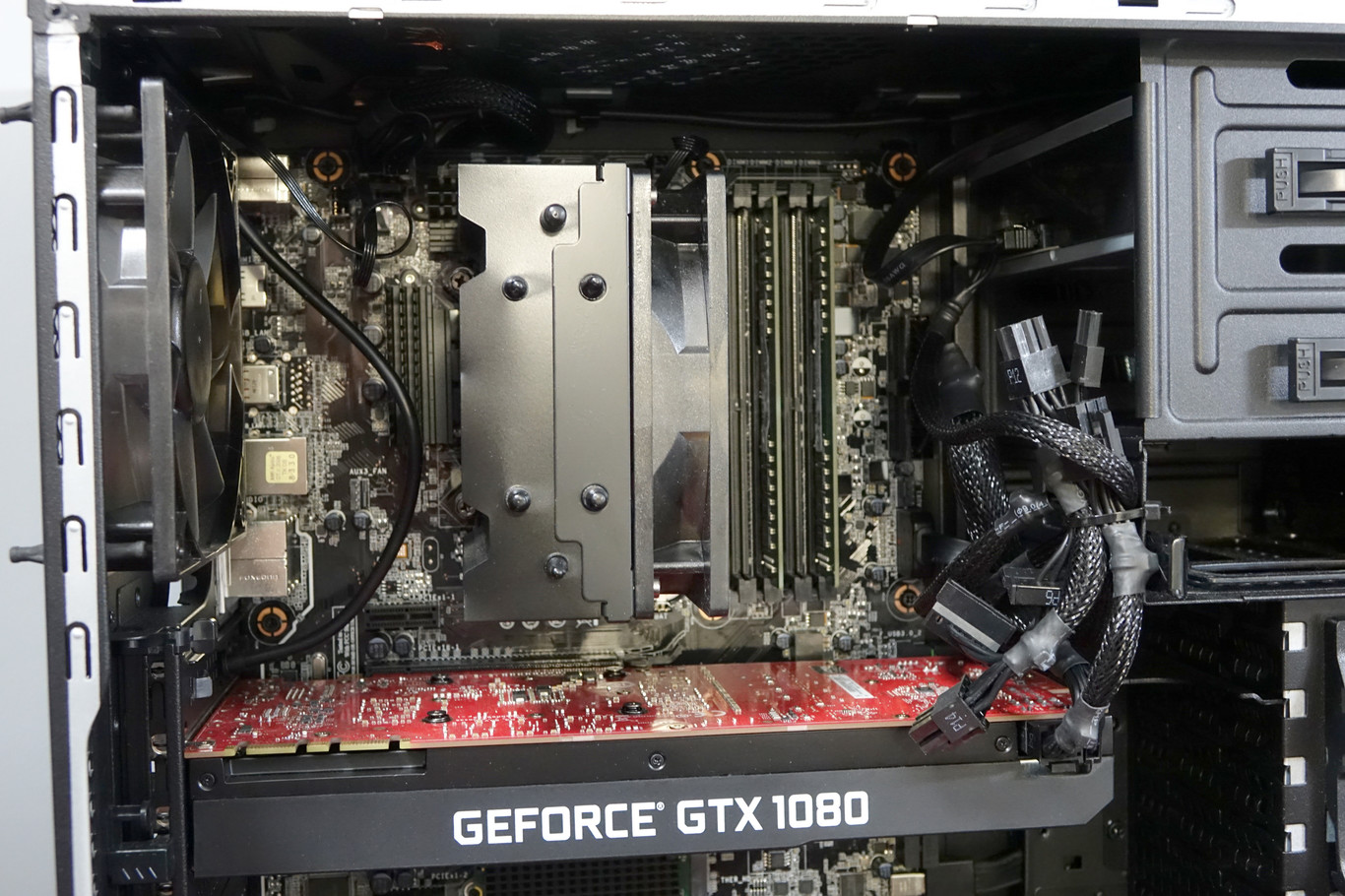 The unit that Lenovo has given us so that we could perform this analysis incorporates a conventional air cooling system, but those users who prefer it can do with this same equipment, but equipped with liquid cooling . This option is very interesting for fans of overclocking, a technique with which, on paper, the components of this PC feel very comfortable, especially the Intel Core i7 microprocessor and the main memory modules manufactured by Corsair.

In the picture that you have below these lines you can see that the interior of the equipment is quite clear, something to be grateful because, in this way, hot air can circulate inside the chassis without encountering physical barriers that prevent it from being evacuated to the outside, and, therefore, renewed with cooler air in an effective way.

The size of the heatsink, which is aluminum, and the fan that are responsible for cooling the CPU is quite impressive. And it is a good idea that they are oversized because, in this way, it is much more difficult for the processor to approach its maximum working temperature threshold. In fact, during our tests, although we put him under tremendous stress for hours to check if his stability was compromised, he did not reveal the slightest hint of fatigue. 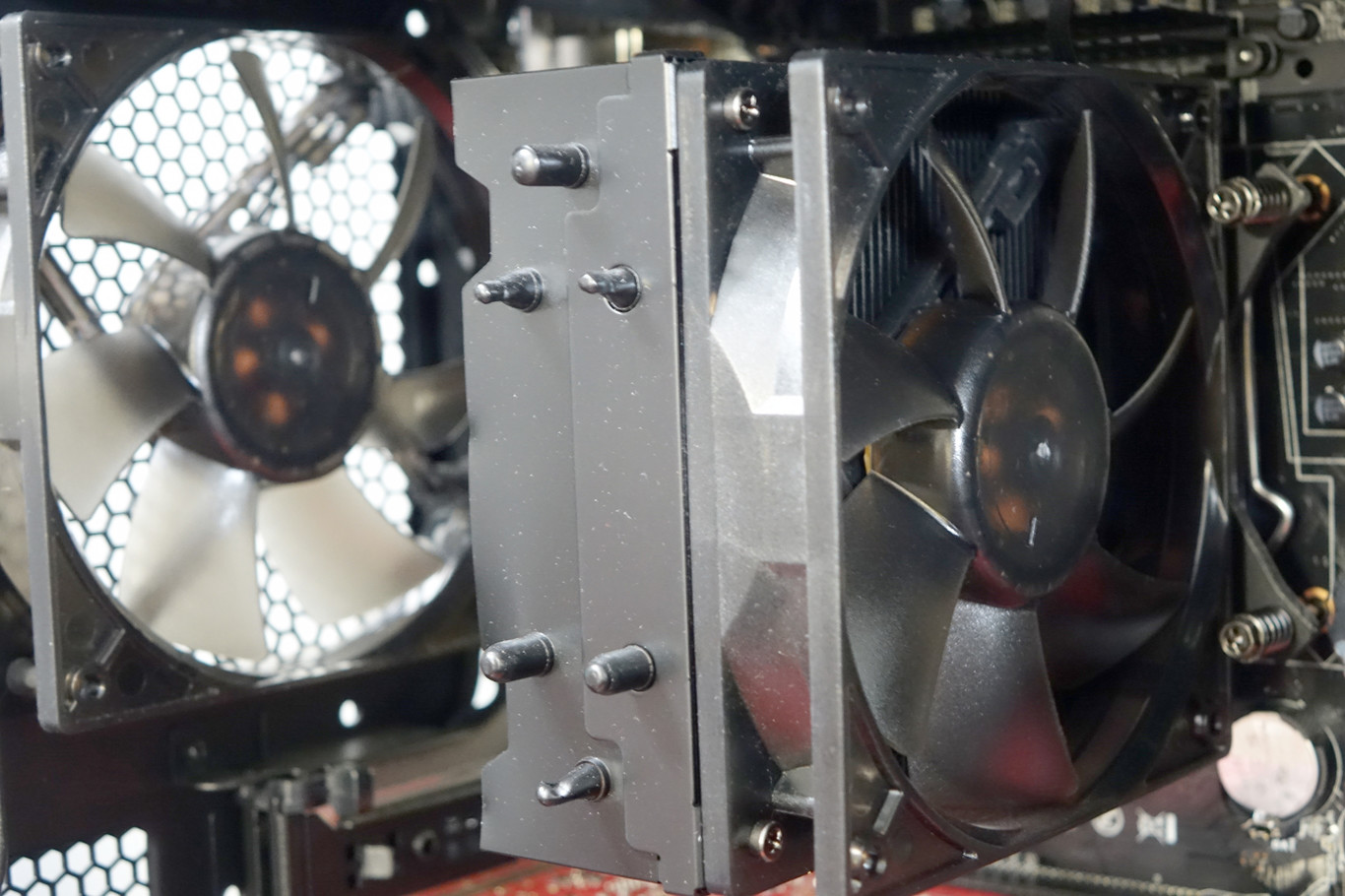 In a team like this, which brings together components with a significant consumption, which, moreover, may be working for many hours in a row, the power supply plays a fundamental role. And it must be able to provide a power supply free of noise, parasites and other anomalies of the electrical network that, if not properly filtered, could cause damage to the most sensitive components of the PC.

Continue Reading: Yoga 920: The versatility and power in convertible laptops comes from the hand of Lenovo at the IFA 2017

Nothing makes me think that the power supply of this Lenovo computer does not have good quality. In fact, as I mentioned before, it has behaved in a completely stable way during our tests. However, in the same way that Lenovo engineers have opted for Corsair memory modules, which have a quality beyond doubt, I think it would have been a good idea that, instead of including an AcBel source, they would have bet by one of the brands most appreciated by gamers, such as Corsair, SilverStone, Thermaltake or Seasonic, among other possible brands.

As I advanced a few paragraphs ago, the subsystem of secondary storage of the equipment has been solved resorting to two units, a SSD disk of Samsung with a capacity of 512 Gbytes, and a mechanical hard disk manufactured by Seagate of 2 Tbytes. In this area the decisions that Lenovo has taken seem right to me, given the price and ambition of this team. Had I had a SSD 256 Gbytes, as other machines of similar price do, I would have criticized it. But the capacity of these two discs seems appropriate, so a point in favor of this Legion Y920. 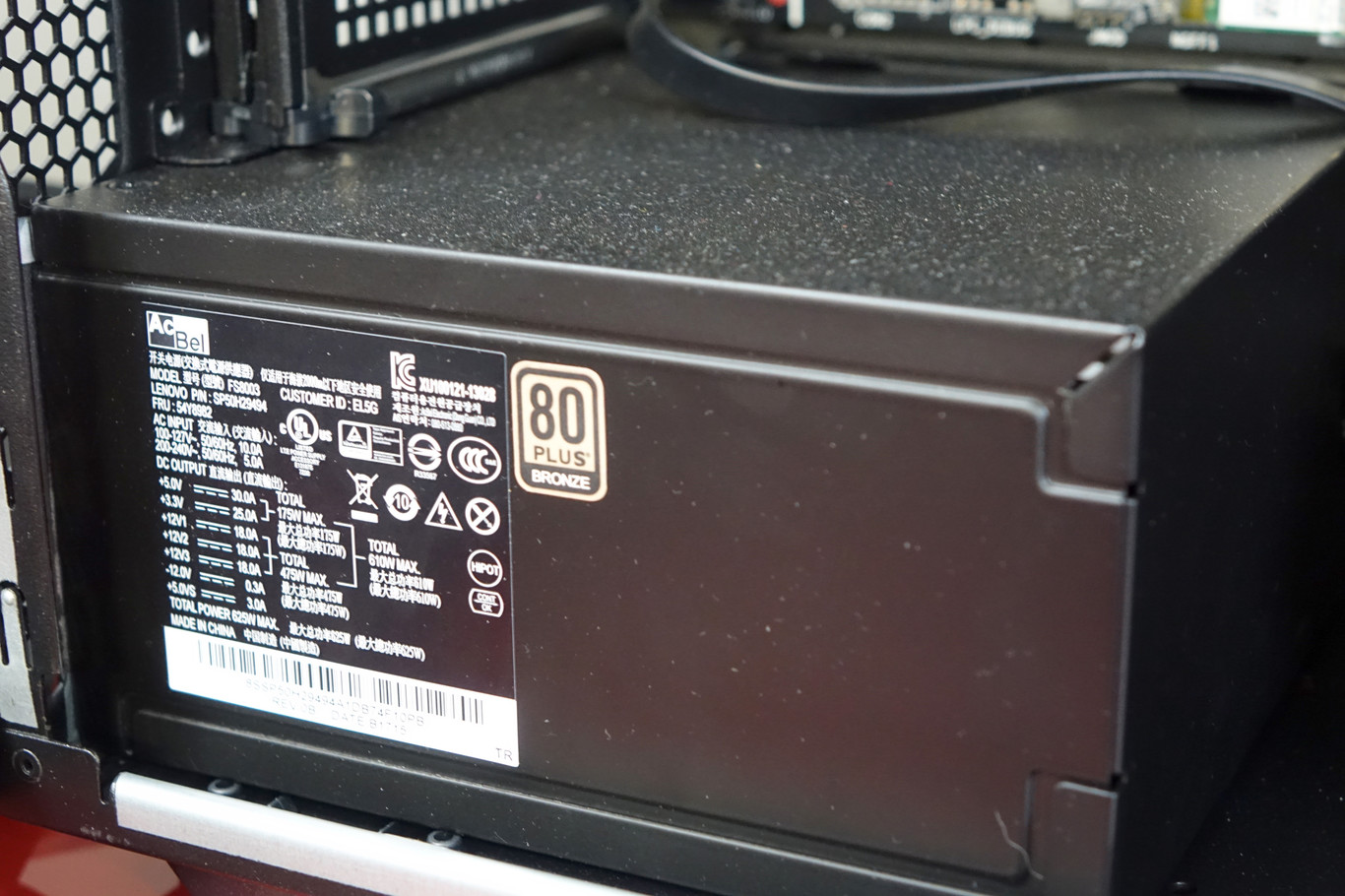 In the following picture you can see in detail the size of the heatsink and the fan that are responsible for cooling the processor correctly. The fact that this PC has not shown signs of instability during our tests shows that these elements fulfill their function correctly. Even so, in a team with the ambition and the price of this Lenovo it would have been a good idea if the dissipator was made of copper. This material has a higher heat conductivity index than aluminum, which would have offered us a slightly greater margin of maneuver when it came to overclocking. Of course, in this scenario the best option is, without a doubt, liquid cooling.

The praetorian guard of this Lenovo 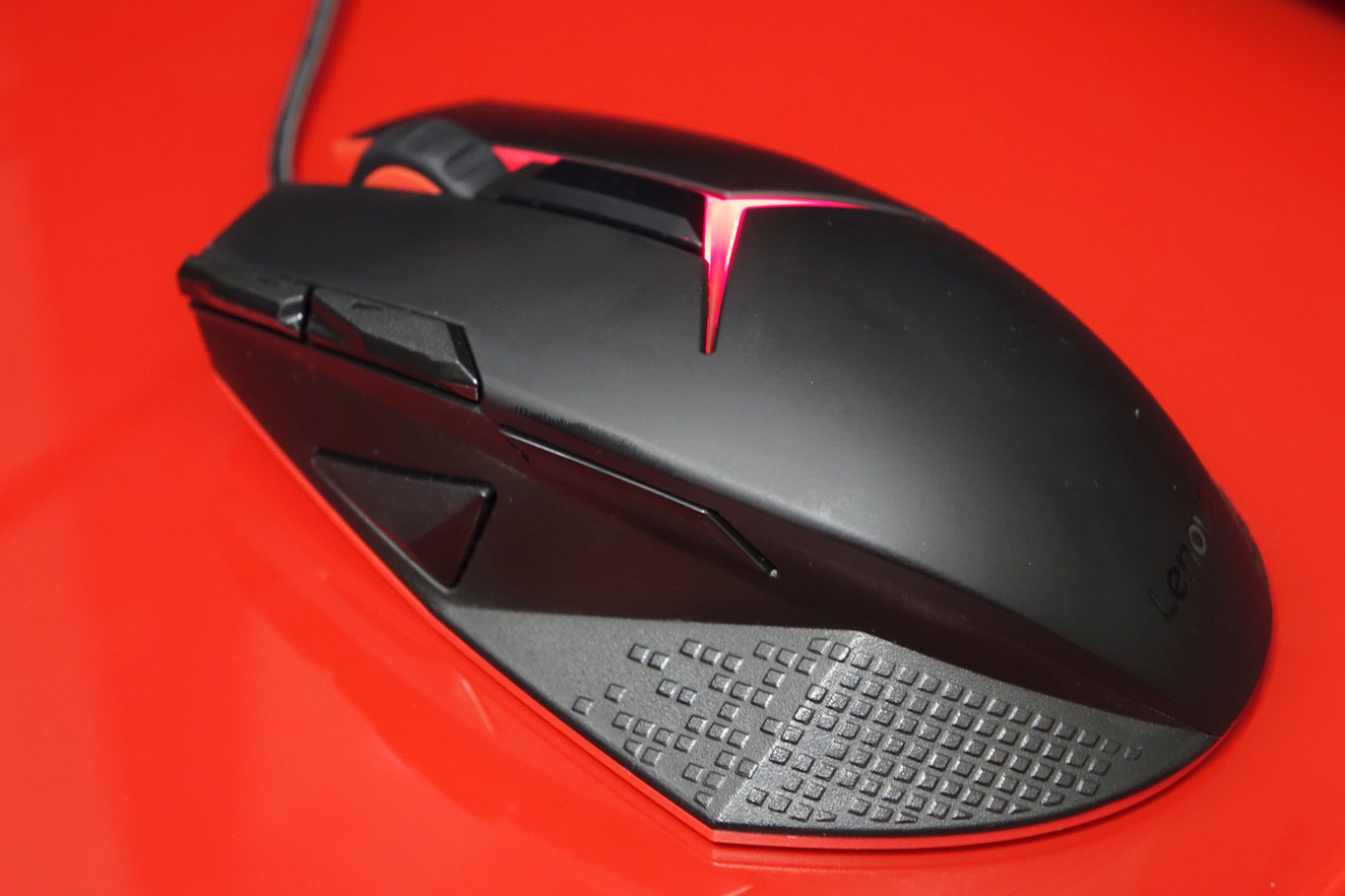 As I anticipated at the beginning of the analysis, the monitor that accompanies this team for gamers is a Y27G from Lenovo itself. This device has a curved LCD VA type panel with Full HD resolution (1920 x 1080), a response time of 4 ms and a contrast ratio of 3000:1. I especially like the possibility of adjusting it in height simply by pulling it up or down. And in Display Mate and Nokia Test, the tools that I usually use to investigate the quality of the panel, have shown to have a fairly high global quality.

His colorimetry is not bad, although his blacks and the level of detail in dark regions are somewhat below the level of the monitors with IPS panel of similar price that I have analyzed. Of course, its subjective response time, regardless of the 4 ms announced by Lenovo, is fantastic. During testing I never appreciated any hint of motion blur (motion blur), so that the edges of objects remained fully defined without halos, no matter how fast the camera is moved. 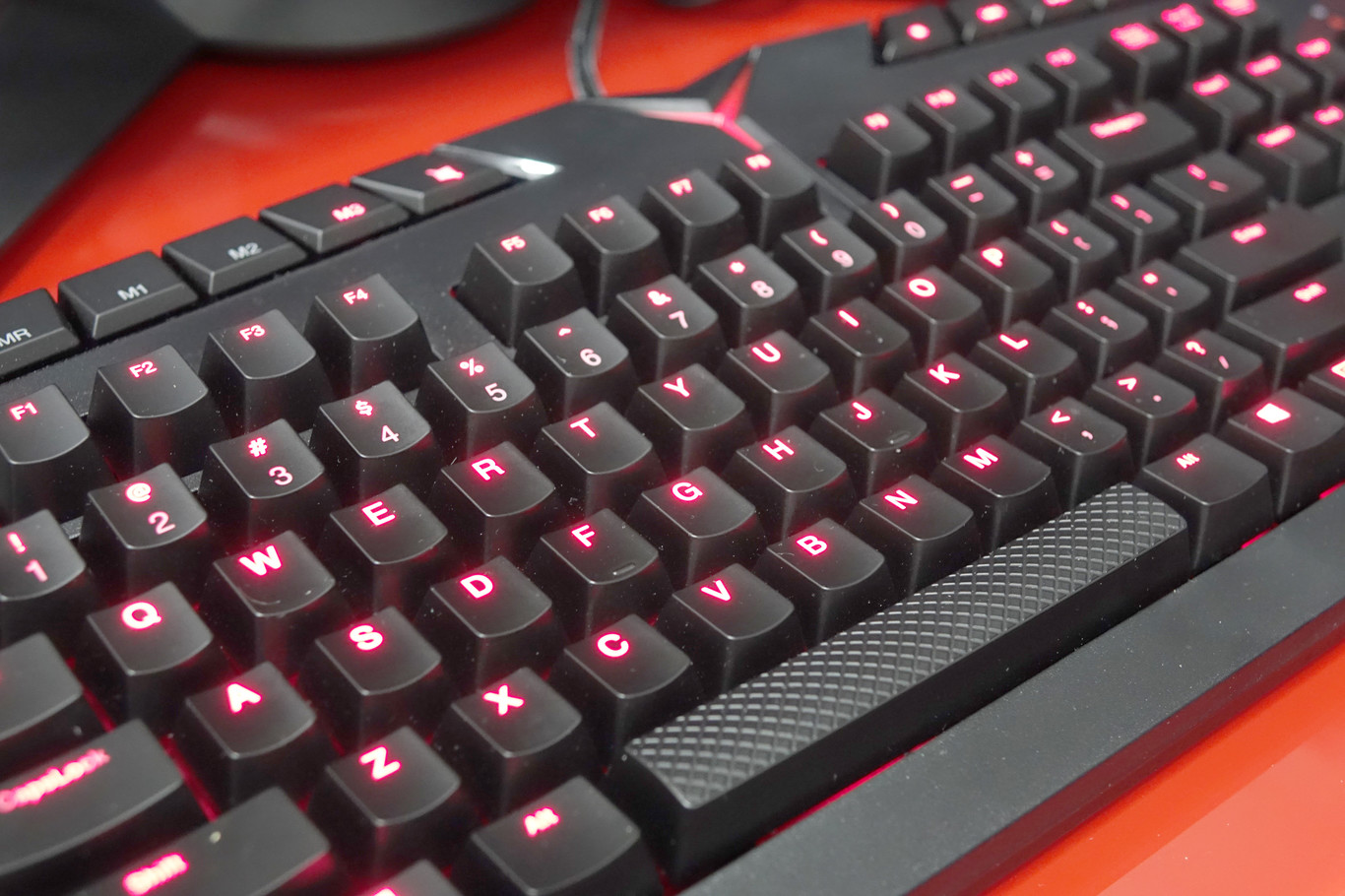 The keyboard, however, left a bittersweet taste in my mouth. It is mechanical, and that seems to me a success, and is also backlit, something that teens usually like. However, the keys suffer from a very strong transverse oscillation, perhaps due to the fact that their travel is excessive, and also because their construction is far from perfect. I think that this equipment deserves a more careful keyboard, so I would not hesitate to change it for a more quality mechanical keyboard, as, for example, the Omen 1100 of HP that we have spoken to you on other occasions.

Unlike the keyboard, the mouse of the Y family that accompanies the Legion Y920 has left me with a good taste in my mouth. Its ergonomics are achieved, the touch of the buttons and the center wheel is very pleasant, it has nine programmable buttons, its weight is adjustable and has a selectable resolution of up to 8,200 dpi. I have even liked that its cable is so malleable, so I could enjoy it for a long time without having to change it. 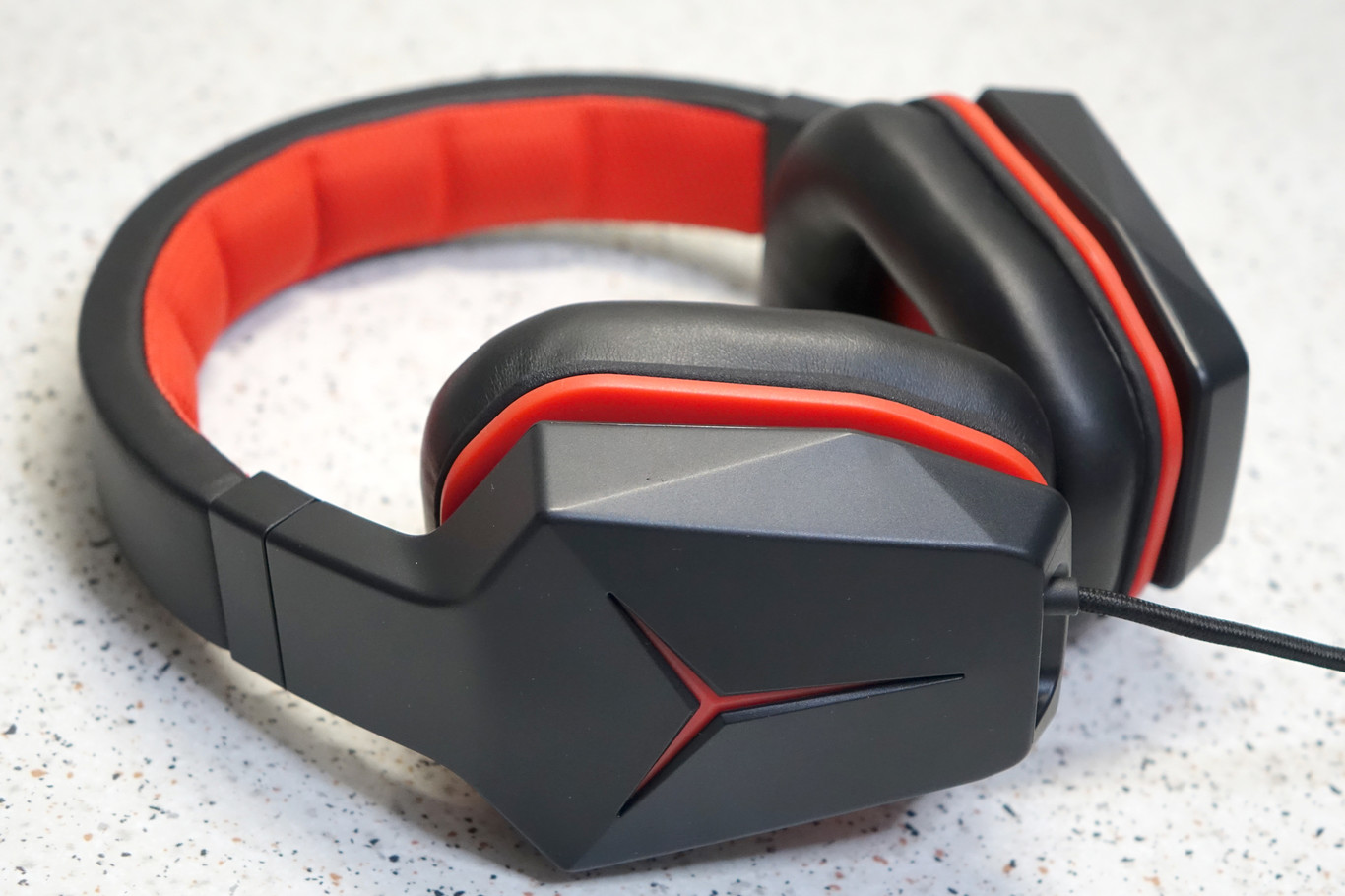 Finally, the headphones proposed by Lenovo to accompany this team, which, again, belong to the Y series of products for gamers, are resultsones. Its design is circumaural, which helps them effectively isolate the environment; They are very comfortable and can play surround sound with 7.1 topology. Its sound quality is not bad, but I have not fallen in love. And it has not done it for two reasons: its extreme end has stuck, but it lacks level of detail, and, on the other hand, when we step on the accelerator and the sound pressure level is high, the distortion can get to annoy, which It causes auditory fatigue. In any case, you could use them without problem, although always with a moderate volume.