Home Software Review Do not underestimate Linux, you never imagine where you can find it!

Do not underestimate Linux, you never imagine where you can find it!

It is a fact that operating systems based on GNU / Linux still untapped potential in the domestic market. Its share of use in our laptops and home computers continues to hover around 1 and 2% according to Net Applications, and although every year we hear phrases like “this will be the year of Linux on the desktop”, these predictions never cease to be fulfilled.

But data from home computers can not lead us into the misconception that Linux is a failure, because if you take heed to all the technology around us we would find the surprise that the penguin is very present in our daily lives.

And why does this happen? Possibly because of the flexibility they provide both free software as open source and the huge advantage when it comes to leverage resources that provide collaborative projects with DNA that we are in GNU / Linux. 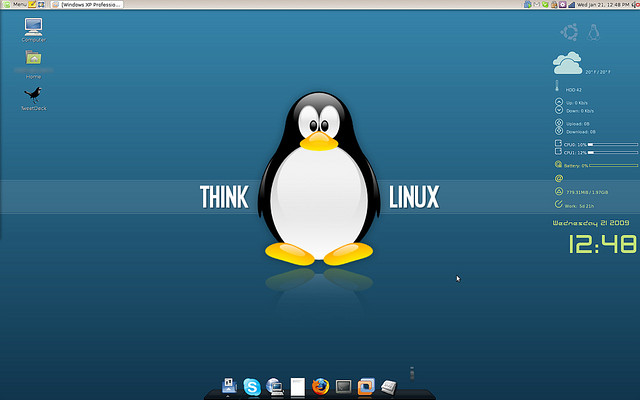 We begin our review of the places where we can find a Linux environment dominated by these systems, the mobile phone. By now many of you already know that Android is based on Linux, but the relationship between the system Penguin and mobile telephony does not end here, since virtually all new operating systems for mobile phones that have been announced over the last two years are based on GNU / Linux.

In this way we can find a Linux kernel on systems like Tizen, developed by Intel and Samsung and that could mean the future of mobile Korean range, and other no less interesting projects as Sailfish OS Jolla or Firefox OS Mozilla. Nor can we forget Ubuntu, one of the most popular GNU / Linux systems for home computers, which is also developing a version for mobile unified with your desktop version for some time.

Although very hidden under the hood, we can find a GNU / Linux engine in some of the major sites of the cyberworld. This engine we can find so much as moved by Linux as the authentic distributions developed by these companies and used by all employees’ servers.

Amazon without going further not only uses Linux to run their operations, but also has an own distort based on Red Hat Enterprise Linux to which they have called Amazon Linux. As if this were not enough Amazon also has developed a platform called cloud computing Amazon EC2, which uses Xen virtualization based on Linux and is used by large companies like Netflix, Autodesk or Bankinter.

Google and Faceboo k are also companies that clearly committed to entrust the security of their servers to GNU / Linux systems, but Google goes a step further and has also chosen to develop a distort own, based on Ubuntu and called Goobuntu, for offices.

Servers other important web services such as Twitter or Wikipedia also use Linux. In fact, the microblogging social network is also a member of the Linux Foundation and appreciates the free software used internally by providing the ability to modify it to suit your needs.

To some extent one can expect that mobile phones and web-based companies bet on the strength of GNU / Linux, but if we take a look at more mundane businesses and some public institutions we also encounter surprises.

The world economy, without going any further, it is protected by Linux – based systems. The New York Stock Exchange, the stock values ​​more active planet, uses Red Hat in its IT infrastructure, while the London Stock Exchange migrated in 2011 its Windows Server 2003 and Novell SUSE Enterprise .Net to Linux to get a most stable and fast system.

Intelligence and army have also found the security they require operations in free software. The FBI without going any further migrated its infrastructure to Linux in 2002, and even the White House did the same in 2012 to migrate their operating systems to Red Hat as a measure to protect themselves from the growing number of virtual attacks.

The fleet of nuclear submarines of the US Navy, the control systems of urban traffic in cities like New York, San Francisco and Los Angeles, and 455 of the 500 supercomputers in the world also using GNU / Linux, making systems penguin in an essential part of the world in which we now live.

The future of science and technology

If you put the magnifying glass on science and the latest technological innovations also we will find the seal of the Linux Foundation and based on GNU / Linux systems. A good example of this is found in the CERN, the largest particle accelerator in the world and one of the places where born scientists of tomorrow discoveries, has also developed its own distribution based on Red Hat to have called Scientific Linux.

Another of the technologies of the future that is increasingly present, the drone, has also received a dose of Linux after the Linux Foundation submit the Dronecode Project, a new open source platform facing increasingly important sector Drones.

Other technology sectors increasingly present as the automation, the onboard computers in cars, or even the wearables or wearable devices also are seeing supported by systems like Android, which as we said earlier, is also based GNU / Linux.