ASUS is a technological reference and its creations in the world of the portable PC have always had an extensive catalog of different formats where they emphasize their multidisciplinary creations. They have experimented with many formats, including some of the first convertible tablets, and their 360 hinge models, such as the Zenbook Flip UX360UA that we will show you today, are the best we can find on the market.

The competition, however, is not far behind and now it is difficult to shade certain models very established among the preferences of the most demanding users. Its Zenbook Flip UX360UA range has a major challenge ahead and today we will know if it has enough weapons to face rivals such as the Lenovo Yoga range or the Dell XPS range. 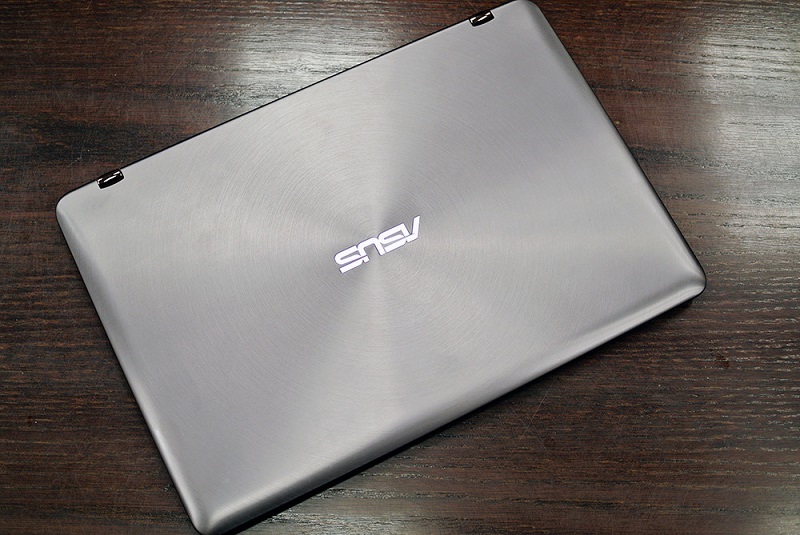 Currently we can find, with different prices, different hardware alternatives in this model. The Zenbook Flip UX360UA has come to light with the generation of Intel Skylake processors and now we can find it with the new Kaby Lake processors. The first models, including our analysis model, can now be found at really attractive prices.

Something that all these hardware variants have in common is that they are configured around an Intel low-voltage processor. I mean Core processors of type “U”, processors of two nuclei with four threads of process and consumptions between the 15 and the 17 watts TDP (with other thermal configurations according to needs of the manufacturer), versatile processors, solvents, even, in the Content creation.

Our analysis model comes equipped with a Core i7-6500U processor. Processor of 2 cores and four threads with a maximum frequency, in turbo mode of 3.1GHz, it is accompanied by 8GB of RAM configured in double channel (soldered in plate) and a disk drive of 256GB with format M.2 and interface SATA, It is a socket Socket3 so we could improve the storage with any M.2 PCI drive with NVMe protocol, it is the only element, together with the wireless card, that we can change in this model.

Integrated graphics come hand in hand with an Intel HD Graphics 520. This is a good graphics to handle ultra-high definition screens, including video in this level of definition, but far from being a solvent solution to play current games. Something that, on the other hand, I think is quite far from the target user for this type of laptop.

ASUS is committed to a fully Intel solution with the integration of an Intel Centrino 8260 card for support WiFi-AC 2×2 MIMO and support Bluetooth 4.1. This wireless chip will allow us to link speeds up to 867mbps. We should not miss much that does not have an Ethernet connector, but it is something to keep in mind. 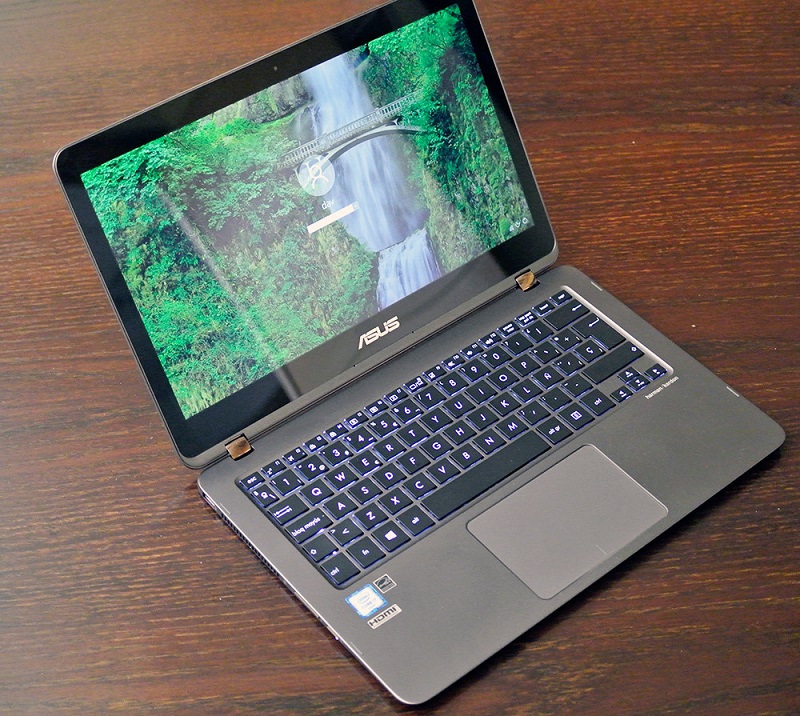 At the software level it is well equipped, with Windows 10 Home and a variety of important utilities for its management and maintenance, but ASUS strives to convert the serial version of the system into a “bazaar” of applications that we have not asked for. Starting with the McAfee antivirus and followed by a whole “gift shop” they strive to run every time we start the system.

It comes to the surrealist when they offer us the same service of “cloud storage” of ASUS and at the same time a promotion of 25GB of storage in Dropbox during six months.

ASUS has achieved in the Zenbook Flip UX360UA a good balance between proportions, materials and finishes. It is a lightweight, somewhat difficult laptop in convertibles with touch screen, with only 1.2Kg of weight. The rest of dimensions, 321x219x13.9mm, also confirm a perfect format to wear in the day to day. We can only point out that the 13.3″ diagonal screen frames could be somewhat narrower.

ASUS has used a monobloc chassis in aluminum with its typical anodized finishes in different colors and with a very light brushing that adopts circular shape in the cover of the screen. It has an excellent feel when we rest our hands on it and it is a material that will maintain its excellent appearance for many years.

The Zenbook Flip convertible 360-degree convertible screen design will enable us to use different modes of the computer: “tent”, “keyboard display”, “conventional laptop” and tablet mode. ASUS intelligently manages the different positions of the screen, locking the keyboard, and touchpad, in the appropriate modes. 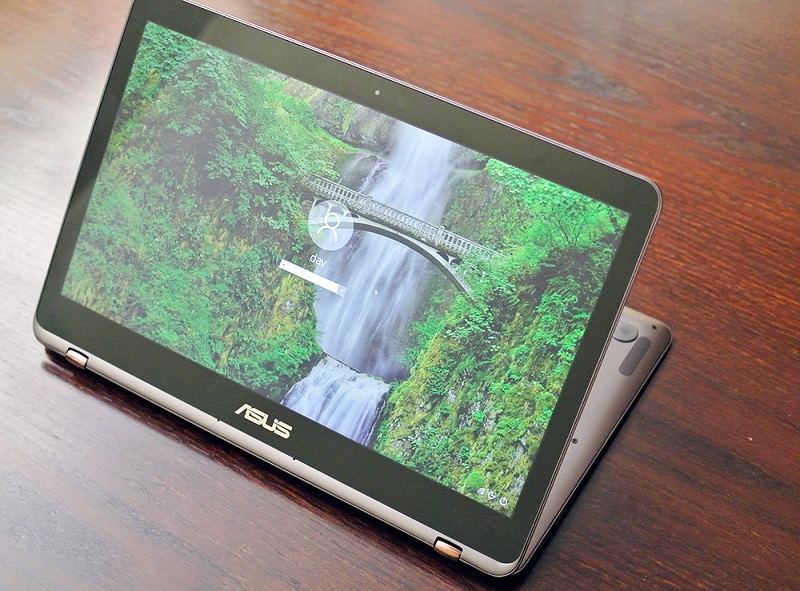 A versatile behavior that is based on an aesthetic element that is for me one of the best manufacturing details of this model. I mean the pair of hinges “360” that allows this laptop to cover all these modes of use. They are exceptionally compact and surprising by their aesthetic, but also by the solidity with which they support all this variety of movements and positions.

The keyboard has the typical “island” design, which is the usual design where the keys are separated from each other, a design introduced by Sony and widely used by Apple. In this case, the average separation is almost 2mm between the key.

It has good travel, pleasant touch and quick recovery. The route is short, as it could not be otherwise in a notebook with such a small profile, but the membrane response and its good recovery make it a keyboard that I would place among the best of its segment. The keyboard also enjoys several levels of backlight, in white.

The touchpad is small, but well placed to not be a problem when using the keyboard. It has built-in buttons and supports all the multi-touch functions required by the operating system. Not the best of this notebook, but its other input methods, such as the touch screen, compensate for its shortcomings.

Connectivity is complete, but not perfect. The physical connectors are concentrated on both sides of the laptop. The power connection is on the right and is a proprietary type connector, a shame in the USB-C era. On this same side we find a USB-C connector, but ASUS has not incorporated any additional functionality beyond USB connectivity 3.1.

On the left side of the chassis there is also an extra USB 3.0 connector and the laptop control buttons like volume control or ignition. The “tablet” mode will thank you for having these buttons on the side where they are accessible. This area also has the hot air exhaust grille. 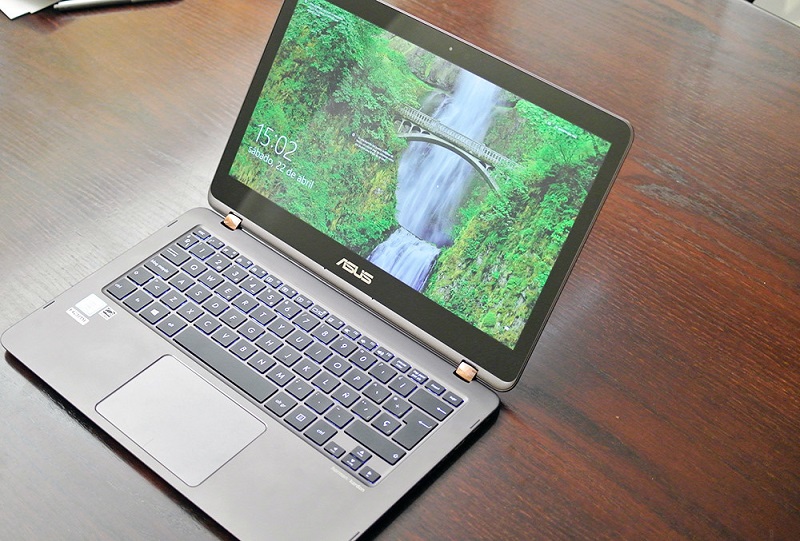 The main performance weakness of this configuration of the Zenbook Flip UX360UA will be found in your storage unit. Its SATA interface limits it a lot with respect to more modern units with units of PCI Express storage and protocol NVMe.

This does not mean that it is not an agile machine of load or execution of applications, nothing further from reality, but it is an element that seems to contradict the excellence in the rest of components of this model.

With a more powerful interface unit, performance results in performance suites that measure various subsystems, such as PCMark 8, the performance result would be far superior. It is not a critical point, but that leaves this laptop behind its competitors, that if they take advantage of the virtues of this type of storage units more modern and fast.

The results are in the average of portable PCs with this type of integrated processors and graphics. It is a balanced result that will allow us to have a high quality performance in Windows and with varied applications such as office automation, multimedia reproduction, design, content creation, etc. Your only handicap will be playing. It is not a machine designed for it.

You may also like to read: ASUS surprises Lenovo with a 14-inch notebook lighter than its ThinkPad Carbon

ASUS offers different types of screen depending on the variant of the UX360UA. Three options to be exact and all with IPS technology. Two of them offer a resolution of 1920×1080 points while the third reaches a resolution QHD + of 3200 x 1800 points. This variant offers color coverage of 72% of the NTSC spectrum. Within the two models with FullHD resolution, we will find different qualities with 45 and 72 percent of NTSC coverage respectively.

Whatever the variant, they are all multi-touch type with glass cover and “gloss” finish. The brightness levels exceed 300cd / m2 and the contrast, in black, exceeds 1200: 1 real thanks to a black brightness of only 0.30 cd / m2. None of the screen versions available are the best screens on the market, but they are within a level that we can consider good quality. Colors with a very rich range, perfect angles, and enough brightness to withstand even exposure to natural light. An ambient light sensor, installed in the upper frame of the screen, allows automatic adjustment of brightness.

The sound maintains the middle level of the screen. “Trigger” speakers in the lower part of the chassis with a powerful volume and a well-worked but obviously distorted equalization when we exceed 50% of the volume capacity of the speakers. Space is always a limitation to achieve a high quality sound solution.

It will do your job perfectly, as do your High Definition Webcam and your dual microphone system installed in the lower frame of the screen. The complete solution we expect from a laptop with the price and quality of this model. 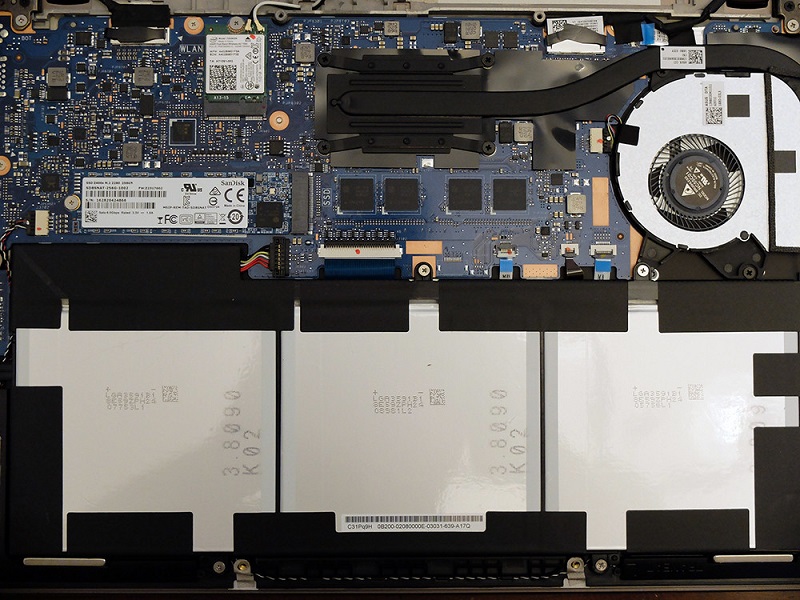 The battery of 57 whr incorporated in the Zenbook Flip offers, on paper, 11.5 hours of autonomy. That’s what ASUS tells us. In our combined tests (a real use as you could give any of you, or us, at work or at home) offers us a more realistic figure of 9 hours. A figure more than remarkable that guarantees a complete “day” of work without having to load it.

Something we do not like so much is the sound behavior in stress. Your fan works quite hard with noise levels that can become annoying. We have collected levels of 39dBA in these situations at a distance of 70cm from the laptop. The usual distance in which we all work in front of a laptop. It is true that these levels are only collected under intense processor stress.

In normal use situations, it is a fairly quiet notebook but any peak power need will result in a noticeable increase in the speed of rotation of your heat ejection turbine.

Luckily in our measurements of temperature, by means of thermal capture, we have not detected temperatures in the areas of support of the hands that could become annoying. They are at room temperature of 23 degrees below body temperature.

Neither have we detected harmful effects on performance when the processor works at elevated temperatures. There is no throttling and in fact, it is able to maintain “turbo” frequencies of 2700 MHz in a sustained way.

This ASUS convertible is a good example of manufacturing quality, well-designed design, use of quality materials and components integration in a balanced way.

There is no aspect of it that shines especially, that allows him to reach in that section the outstanding. Medium performance hardware, quality displays, varied connectivity. Except, perhaps, the autonomy, that touches the outstanding, and its design, which combines quality materials with a careful appearance and a very reduced profile.

The direct competition of the Zenbook Flip UX360UA will be found in models like the Lenovo Yoga 910 or the new Del XPS 13 2 in 1. Both models have similar price ranges and configurations. ASUS defends well, in my opinion, with respect to both models. It offers similar hardware, similar qualities and, unlike the other two, has more “classic” connectivity for those who still do not dare to be left in the hands of the all-around USB-C.